Moving on to round 2 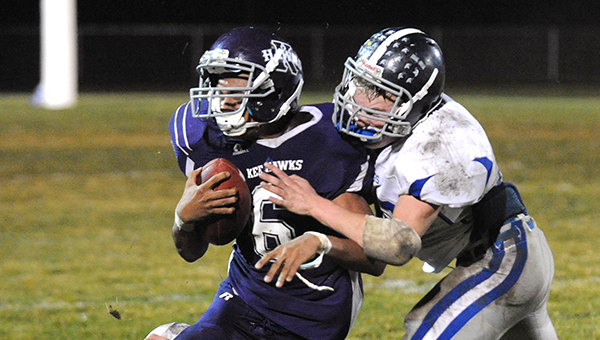 LANSING, Iowa — The Northwood-Kensett football team walked out of the fog and smoke from a bonfire at Kee High School’s football field as the victor on Wednesday. 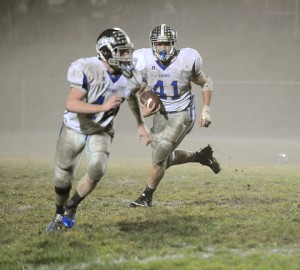 Brandon Brockman, right, carries the ball, while Mitchell Athey is the lead blocker on a run to the perimeter Wednesday at Kee during the first round of the 8-Man state playoffs. Fog and smoke from a bonfire made visibility low. — Micah Bader/Albert Lea Tribune

The Vikings utilized multiple weapons in the backfield to overpower Kee 36-22 in the first round of the 8-Man playoffs.

“Sometimes you’ve just got to drop the shoulder, run into guys and get through holes,” Brockman said. “Our linemen got those holes for us.”

Northwood-Kensett scored on the third play from scrimmage on a 39-yard quarterback keeper by Josh Einertson to take a 6-0 lead. Kee answered with a touchdown of its own and made the two-point conversion to take an 8-6 lead.

However, that was Kee’s only lead of the game. Halfway through the second quarter, Northwood-Kensett recaptured the lead with a touchdown pass from Einertson to Logan Nielsen on fourth-and-18 from one yard outside the red zone. The Vikings added another touchdown after a 48-yard reception by Mitchell Athey set the Vikings up at the 2-yard line. Brandon Brockman barreled into the end zone on the next play to give his team a two-possession advantage (22-8). The two-point conversion was good on a pass to Tom Yezek.

Kee had about 2 minutes left before halftime to cut into its deficit. The Kee Hawks had trouble moving the ball, but penalties allowed them to get inside the Vikings’ 10-yard line. Northwood-Kensett’s defense rose to the occasion and forced a turnover on downs.

“We take a lot of pride in our defense,” Northwood-Kensett head coach Dave Capitani said. “Even though we had a few breaks here and there, we didn’t give them big plays and forced them to drive the ball.” 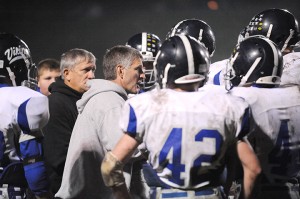 Northwood-Kensett head coach Dave Capitani talks to his players during a timeout Wednesday at Kee during the first round of the 8-Man state playoffs. — Micah Bader/Albert Lea Tribune

Northwood-Kensett had a 22-8 lead at the half, but a fumble recovery for a touchdown by Kee two minutes into the third quarter made it a one-possession game.

The Vikings responded five minutes later with a 1-yard touchdown run by Coleby Bratrud on fourth and goal.

two-point conversion. The Kee Hawks trailed by six points (28-22) and drove to midfield. However, an interception by Athey on a deep pass stopped Kee’s attack.

“It was kind-of like a punt, but obviously it was a big turning point for us,” Capitani said. “It gave our defense some momentum, and I thought our pass defense did pretty well all night.”

On the Kee Hawks’ final offensive possession, they opted not to punt 4th-and-1 from their own 25 yard line. The quarterback dropped the snap, and fell on the ball for a loss of yardage and loss of possession of the ball. Brockman plowed into the end zone with less than three minutes left in the game, and the two-point conversion was successful on a run by Bratrud.

In the second round of the state playoffs, the Vikings play a familiar foe: Don Bosco. Northwood-Kensett lost its regular season finale 64-50 against Don Bosco at Gilbertville. The Vikings get a chance to avenge the loss at 7 p.m. Monday.

“We were hoping we could pull off this win so we could get another shot at them,” Brockman said. “It was a close game last time, and we hope to beat them this time.”