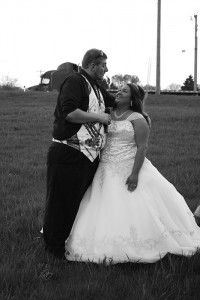 The bride is the daughter of Mathew and Randie Luna of Albert Lea, originally of Hollandale. Grandparent is Gloria Luna of Hollandale.

The groom is the son of Debra and Glen Salthe of Clarks Grove. Grandparent is Betty Schaper of Bricelyn.

Ushers were Steve Krogsgaard, of Manchester, uncle of the groom, and Josh Herplink, of Northwood, brother-in-law of the groom.

Ring bearers were Landon Lenz and Rylan Lenz, of Albert Lea, nephews of the bride and children of Nicole Luna and Steve Lenz.

Personal attendant was Kari Wulff, of Albert Lea, friend of the couple.

A reception followed the ceremony at the Albert Lea Armory.