What will the levy mean to you? 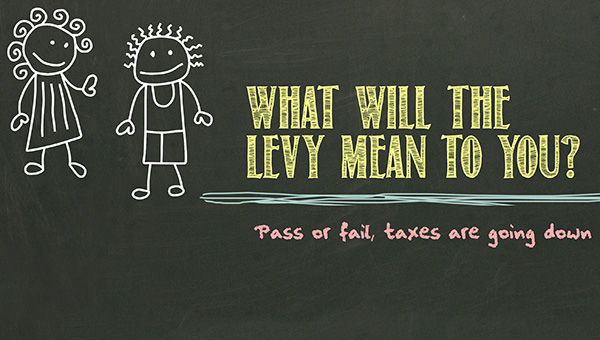 Pass or fail, taxes are going down

Asking for money from local taxpayers is always a scary notion for schools, but Albert Lea School District officials are hoping for support from the community especially because they’re not asking for any increase in funding. 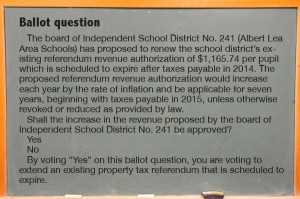 Their question will be on the ballot this Nov. 5, and there are no other issues to draw voters to the polls. That question asks voters in the Albert Lea School District if they will renew a $1,166-per-pupil operating levy that provides almost 14 percent of the school district’s general operating fund.

District administrators made the decision not to threaten any specific cuts if a levy referendum were to fail, and part of that is because they have two chances for voters to renew this levy. The current operating levy doesn’t expire until next year, so if the referendum fails, the district can ask voters again in November 2014.

A total of 13.9 percent of the general operating budget for Albert Lea schools is tied to local taxes. Each year district property owners provide a little more than $2 million in taxes to the schools. Because the local operating levy is in place, the district also gets $1.4 million in state aid. That $3.5 million makes up 13.9 percent of the general budget.

“It would be a gaping hole in the district, basically,” Superintendent Mike Funk said. 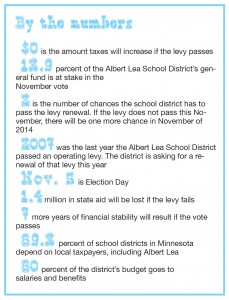 Funk also said that as of the 2013-14 school year, 89 percent of school districts in Minnesota rely on voter-approved local levies, in addition to their normal tax rates.

When cities or counties want additional revenue, they set a levy that raises taxes. Not school boards. They go through the act of setting a rate for their basic education levy, but it is based on what the state tells them to do. If they need more, they must ask their voters for what the state calls an excess levy, though district leaders dislike that term and rarely consider them to be “excess.” Some are operation levies, like what Albert Lea wishes to renew; some are construction levies, like what United South Central approved last year. 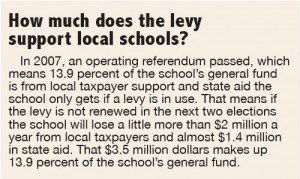 How does the levy support local schools? Click on image to enlarge

The levy renewal on the ballot this fall is integral to schools, said the district’s director of finance and operations, Lori Volz.

“With the existing referendum we have a balanced budget,” Volz said. “It goes to show how crucial this funding is to maintain programming.”

Taxes are going down

Levy or not, taxes are going down a small amount for taxpayers in the Albert Lea School District. Early this summer, the Minnesota Legislature approved a measure that would equalize state aid to schools. Rural schools districts like Albert Lea will receive state aid that is meant to relieve the local property tax burden. It is also supposed to help equalize the disparity between rural schools and schools located in places with many businesses, and therefore a bigger tax base, like metro schools.

“That is why we’re seeing a drop in the taxes payable,” Funk said. “It’s absolutely good news for the district.”

These savings will be seen on the school district portion of property owners’ 2014 tax statements, to be sent out this fall.

The current operating levy was voted into place in 2007 with 59 percent approval in an election with 62.5 percent turnout. It is a seven-year levy. School officials decided to ask voters to renew the levy in 2013, even though it’s a year before the levy needs to be addressed.

That decision, Funk said, is because the district would like to see if the levy renewal can pass. If it fails this November, they still have a shot at it next year and it would be on the ballot in November 2014.

Funk said one of his most important talking points when speaking with voters is that taxes will not go up if the levy passes.

“We’re not asking for more money,” Funk said. “We’re just renewing something we had.”

Funk said the district has done well at finding funding sources from other sources than local taxpayers for school updates, new technology and other school improvements.

“It’s a tactical decision from the board to show local taxpayers we’re going out for a referendum and not asking for more money because we know what we’re doing,” Funk said.

Funk said he knows that Albert Lea is a conservative community, and he and the school board want to respect that by asking the public to renew this current levy without any increases.

School board Chairwoman Linda Laurie agreed and said the district did have the option to ask for more money per pupil.

“The board didn’t even consider asking for more money,” Laurie said. “We just want to renew it as it currently is.”

Funk and Volz have been to area schools to meet with parents and teachers, and they have met with service clubs and other organizations around Albert Lea. Video and slideshow presentations are available on the district’s main website page, and the video is showing on the city’s cable access channel. The presentation show that other school districts in southern Minnesota are asking for levies this fall on Election Day. Owatonna and Faribault are asking voters for levy increases, and Mankato is asking its voters for $70 million for a new school and other building updates.

“People are always complaining about public entities and how they are wasteful,” Funk said. “We’re trying to demonstrate to the public that we’re good fiscal stewards of the resources that are provided to us and we’re not going to ask for any more money than what’s necessary.”

What if the levy fails twice?

If the majority of voters vote no to the levy renewal next month, nothing would change in the next year. The levy renewal issue would be back on the ballot in November 2014. If it fails then, the school district will lose almost 14 percent of its general operating monies.

Funk said he and the board don’t want to threaten cuts to specific programs in an effort to get voters to pass the levy renewal. They are telling the voters all the positive things going on in the district and hoping that voters let them continue their efforts with the current levy.

But there would be cuts, there’s no doubt about it. With 14 percent of the general operating funds no longer available, the district would have to make some tough choices. At one referendum information meeting at Halverson Elementary School, mother Lisa Smith pressed Funk to tell her what would happen if the levy fails twice.

“The easiest thing is to cut staff and then class sizes go up,” Funk said.

Because about 80 percent of the district’s budget goes to salaries and benefits, cutting teachers and staff is simpler than cutting specific programs. Funk is hoping it doesn’t come to that. Either way, the decision of what to cut would rest with the school board.

“We’re not asking for more money,” Funk said. “You can’t put a price tag on a child’s education.”

Laurie said she hopes taxpayers see that the school system has great programs in place and that students are increasing achievement.

“I think we have a strong community that supports education,” Laurie said. “We’ve increased our programs and want to continue on that same track we’ve started.”

Laurie said she appreciates all the work Funk and Volz have been putting in as they try to educate the public about the vote.

Smith, the mother of a fourth-grader at Halverson, said she was grateful administrators visited and spoke about the upcoming referendum.

“If people were to listen to the facts, I think they would decide to get out and vote yes,” Smith said.

Funk said he is hoping that the community renews the levy so the district can keep moving forward.

“I have a positive feeling about this levy because of all the great things we have going on in this school district,” Funk said. “I think the vote we see from the community will reflect that.”

What if the levy passes?

If a simple majority of voters vote yes on the ballots this November, then the school district can renew its existing operating levy for the next seven years. That would mean it’s guaranteed local taxpayers will help the school district for seven more years.

“It’s just crucial that we do renew this referendum,” Volz said.

There are no certainties with state aid from the Legislature in the next seven years, but Volz said that knowing the district will have local taxpayer support would help the district immensely.

“We’re going out a year early to be prudent so we’re not having major cuts if we don’t get it passed,” Funk said. “We’re asking for a straight renewal; it’s a good time for us to be going out to maintain the direction we’re going.”