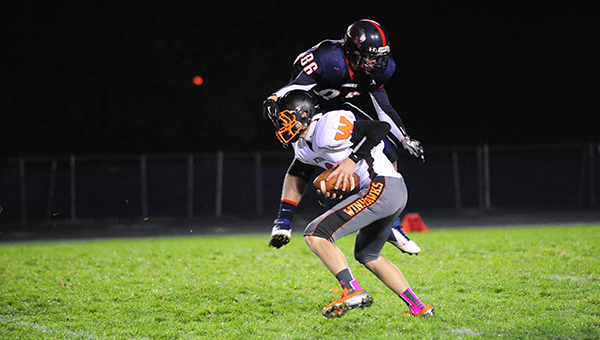 The Albert Lea football team found itself in a hole too deep to climb out of Wednesday on Senior Night against Winona. 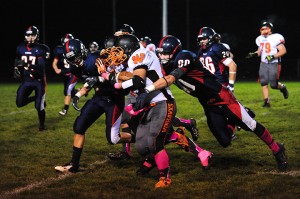 “We started with 40, and only some of us stuck through it,” said Albert Lea captain and All-Conference tight end Cody Scherff. “It’s tough thinking that it’s our last game at home. We made some good memories here, and we’re all going to miss it.”

Despite outstanding performances by Albert Lea running back Bany Chan and Scherff, the Tigers (0-8 overall) finished the regular season with a 60-21 loss to the Winhawks.

Chan rushed for 137 yards and a touchdown on only 13 carries. That’s more than 10 yards per rush. Despite a lingering shoulder injury, Chan showed off his balance while breaking through the line and sprinting away from the Winona secondary for a 40-yard touchdown in the fourth quarter.

“I almost stumbled and fell, but I caught myself,” Chan said. “It was nice to get a touchdown in my last game on this field.”

Scherff caught two passes, including a 25-yard dart for a touchdown from senior quarterback Drew Cole. 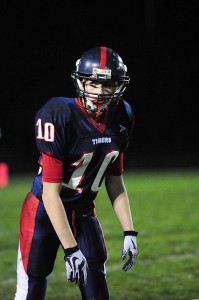 Albert Lea wideout Jakob Kilby looks to the sideline Wednesday to confirm he is on the line of scrimmage. — Micah Bader/Albert Lea Tribune

“It was a play-action pass, and I went across the middle on a drag route,” Scherff said. “Tim Christianson made a huge block for me. It takes everyone. One person can’t do it alone.”

Junior quarterback Triston Westerlund also found the end zone for the Tigers. He scored Albert Lea’s first touchdown of the game with a 48-yard run early in the third quarter.

Unfortunately for the Tigers, their scoring came too little, too late.

The first quarter was reminiscent of the Tigers’ rough start at Owatonna, where the Huskies raced to a 23-0 lead in the first six minutes of the game with a safety and three rushing touchdowns.

Against Winona, the Winhawks jumped to a 21-0 lead in the first quarter with three touchdowns and a safety. The main difference was that Winona missed two of its extra points.

In the second quarter, Albert Lea held Winona to a fourth-and-goal situation at the Tigers’ 1-yard-line. Winona’s bruising senior running back, Vincent Pham, scored on a run between the tackles, and the Winhawks kept building momentum.

“We were not ready to play,” Albert Lea head coach Max Jeffrey said. “We just didn’t have the focus we needed to start the game, which is unfortunate.”

In the second half, Albert Lea started clicking offensively. However, Winona still outscored the Tigers 27-21 in the final two quarters.

In Section 1AAAA, Albert Lea is in sixth place out of six teams. Kasson-Mantorville is first at 7-1, Stewartville is second at 7-1, Winona is third at 3-5, Byron is fourth at 2-6 and Red Wing is fifth at 0-8.