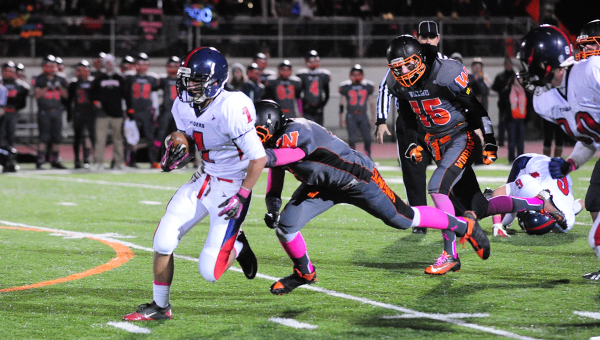 WINONA — The Albert Lea football team had more turnovers than first downs at Winona, but the Tigers were able to have some fun on Tuesday before their season ended.

Winona led 47-6 in the fourth quarter of the Section 1AAAA quarterfinals when the Tigers were forced to punt in their own territory. However, Albert Lea head coach Max Jeffrey had something different in mind. 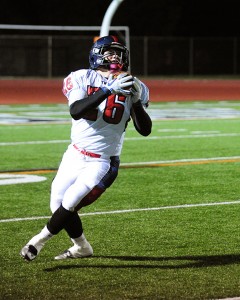 Tim Christianson of Albert Lea catches a kickoff Tuesday during the Section 1AAAA quarterfinals at Winona. Christianson was received the snap in a play called the puntrooski that led to a Tigers touchdown in the fourth quarter. — Micah Bader/Albert Lea Tribune

“It’s called the puntrooskie,” Jeffrey said. “We like to have a few fakes in our bag of tricks, and the guys executed it.”

The play was made famous in 1988 when Florida State head coach Bobby Bowden used it against Clemson. Former Albert Lea head coach Clay Anderson put it in the playbook, and Jeffrey kept it.

“Those guys on the left side of the line held their blocks just long enough so Dereck could sneak through there,” Jeffrey said. “They had no clue who had the ball.”

The touchdown was the last score of the game, and Albert Lea was eliminated from postseason play with a 47-12 loss.

Including the fake punt, Samudio led the Tigers with 73 rushing yards. He said he will work to get physically stronger in the offseason and wrestle this winter.

“My plan is to hit the weights a lot this year,” Samudio said. “Hopefully, next year we can start to win a lot more.”

Jeffrey said he wants the rest of his team to branch out and play other sports during the offseason.

“I’m in favor of multi-sport athletes,” he said. “Whether it’s wrestling, basketball, swimming or hockey. Whatever we have in the winter — and then in the spring too — I want our kids competing.”

With experience, players learn to function in high-pressure situations, and they can bring that skill to the football field, Jeffrey said.

In the first quarter, Winona jumped to a 14-0 lead with a pair of rushing touchdowns by bruising running back Vincent Pham. 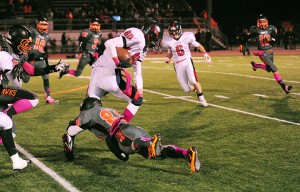 Cody Scherff of Albert Lea tries to avoid members of the Winona secondary after making a reception Tuesday during the Section 1AAAA quarterfinals at Winona. — Micah Bader/Albert Lea Tribune

The Winhawks added 13 more points in the second quarter, but Albert Lea got on the scoreboard 52 seconds before halftime when Triston Westerlund stiff-armed his way into the end zone on a an eight-yard run.

The Winhawks scored 20 points and shut out Albert Lea in the third quarter, and the only action in the fourth quarter was the puntrooskie.

“I don’t know if there’s a team out there that can overcome that many turnovers,” Jeffrey said.

Albert Lea finished the season 0-9, and Jeffrey said he wanted to thank the players, their parents, the student body and the staff for their support.

Senior quarterback Drew Cole made all four of his completions to senior tight end Cody Scherff for a total of 30 yards.

“It’s unfortunate to lose the seniors,” Samudio said. “They’re a great group of guys, and it was fun playing with them.”