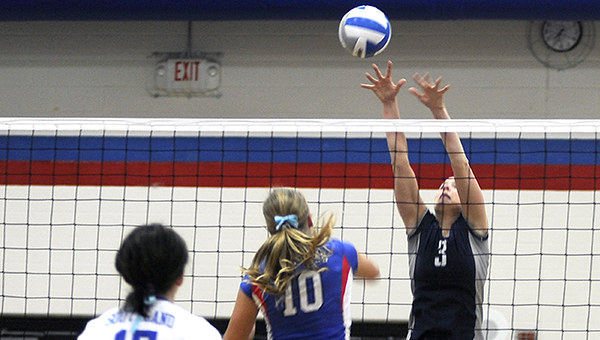 Madi Ziebell of Glenville-Emmons goes up to block a hit for the Wolverines in Adams Monday. The Wolverines were swept 3-0 at Southland. — Rocky Hulne/Albert Lea Tribune

Southland sweeps Glenville-Emmons in 1st round of postseason tournament

The Glenville-Emmons volleyball team saw its season end on Monday night, but a stable full of young talent has head coach Lisa Ziebell excited for the future. 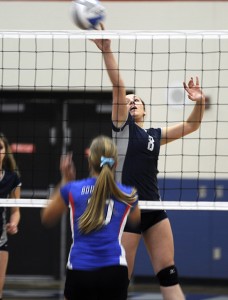 Rieley Madson of Glenville-Emmons tries to spike the ball in Adams Monday. Madson earned 16 digs, four kills, three assists and a block against the Rebels. Madson is one of three seniors this season. Glenville-Emmons finished 2-16-1 overall. — Rocky Hulne/Albert Lea Tribune

“We started the night out pretty slow,” Ziebell said. “The third game we started coming around, but in volleyball if it takes you until the third game to come around, usually the other team has got enough fire to end the night.”

“I thought the girls would be able to pull off a win tonight,” Ziebell said. “We just started out too slow again.”

Madson and Lundmark, along with Paige Marlin will all be absent from next year’s squad because of graduation, but Glenville-Emmons did get solid contributions from its underclassmen this season.

“There’s a lot of promise coming up with the underclassmen,” Ziebell said. “They work hard in practice, and they stepped up into some positions this year.”

But the Wolverines head coach was quick to point out that it will not be easy to replace the three departing seniors.

“It’s going to be hard to replace the seniors, especially Rieley Madson,” Ziebell said. “Rieley led us in digs this year, and whenever you have to replace your setter that’s a tough job.”

Ziebell said depending on how the team works this summer, she thinks they could have a “pretty good” season next year.