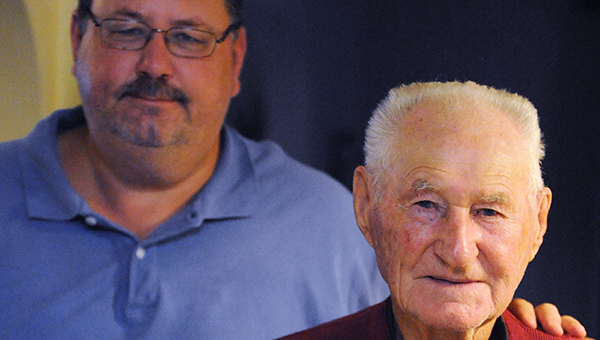 Roland “Rollie” Marquardt, right, stands next to his son Bob in his Garfield Avenue home. Marquardt played minor league baseball in the 1940s and was in the Brooklyn Dodgers organization at the same time as Jackie Robinson. –Drew Claussen/Albert Lea Tribune

The movie “42,” which recounted the life of legendary baseball player Jackie Robinson, was the first movie Roland “Rollie” Marquardt had seen in theaters in more than 50 years.

The movie’s plot was nothing new to the 92-year-old Albert Lea resident, because he had seen it play out firsthand in 1947. Marquardt spent the last year of his professional baseball career with the Brooklyn Dodgers organization, the same year that Robinson got called up to the big leagues.

He said the film was a little dramatized but accurate.

Marquardt was born in Bowler, Wis., a town of about 300 that one might miss when blinking. He grew up with three brothers and one sister — the four siblings exactly matched the number of other people who were in his graduating class. He grew up on a farm and, like most everyone else in small towns in that time period, loved baseball.

“We couldn’t afford to do nothing else,” Marquardt said about playing baseball when he was young, adding that other sports like football weren’t really around yet, especially in small towns like Bowler.

Marquardt didn’t seek out a baseball career. He was actually, in a way, forced into one. His brothers convinced him to go to a tryout at a baseball school in Fond du Lac, Wis. The baseball school would develop prospects and sell them to major league organizations. Both he and his brother Dell ended up signed, Rollie by the Brooklyn Dodgers organization and Dell by the New York Yankees. Rollie was a pitcher and Dell was a catcher.

Baseball, and the organization of the minor leagues, was different in the 1940s. There were more levels that went along with the A, Double-A and Triple-A, like B, C and D leagues. After going 11-8 with a 2.80 ERA in Fond du Lac in 1941, Marquardt was sent to Reading, Pa., to finish the season.

In 1942 he played with the Class-C Dayton Ducks of the Middle Athletic League before taking some time away from baseball to serve in the Navy.

“One year I was in the Navy, then I went back to the farm for a couple of years,” Marquardt said, adding that he literally got called back to baseball after that. “They kind of boss you around. They owned me, so they said, ‘You’re going to Danville.’”

He got back into baseball in 1946, playing for Class-B Danville, Ill., and Double-A Mobile, Ala., two cities he didn’t really care for.

“It was so Goddang hot (in Danville) that I couldn’t stand it,” Marquardt said. “I don’t think they had heard about air conditioning in those days.”

He also had some choice words for Mobile that aren’t fit to print.

He played in Danville again in 1947 before moving to the Triple-A Montreal Royals. It was with the Royals that he went through spring training with Robinson.

“There was really some mad guys, I’ll tell you that,” Marquardt said about the time he spent with Robinson.

He added that not everyone was upset just because Robinson was black. The two players who played first base for the Dodgers the year before were upset because they were losing their place on the team.

“They were (expletive) off because Jackie was a second baseman and when he went to the big leagues he went as a first baseman,” he said. “Howie Schultz was sold to Philadelphia and the other guy came to our place, so they were mad about that.”

After his time in Triple-A, a job and the opportunity to pitch for the Packers of the Southern Minnesota League brought him to Albert Lea. He worked at the Wilson & Co. meatpacking plant as a delivery driver until he retired in 1983 and pitched for the Packers until an arm injury forced him to call it a career after a couple seasons.

“They used to get 5,000 people at Hayek Field for those games.” His son Bob Marquardt said. “They had a lot of ex-major leaguers playing in that league for years.”

The effect of the experienced baseball players living in the Albert Lea area could be seen even after they were done playing.

“All us kids grew up talking baseball all the time,” Bob Marquard said. “When we were little, I remember our little YMCA team they used to have, we had like eight guys who ended up playing college ball.

“They were trying out how to hold a bat, and we had guys doing run downs and pickoff plays,” he added. “We were so far ahead, even up to high school and college.”

Marquardt said that in its heyday, the Southern Minny League was probably at a Single-A or Double-A level. He got $100 for every game he pitched in, which was a better deal than the position players got. They had to wait until the season was over and split up what the team had made during the season.

Nowadays baseball is still a huge part of Marquardt’s life. He never misses a Minnesota Twins game, despite how bad the team has been recently.

The former pitcher’s summary of last year’s Twins season was short and sweet.

“Their pitching sure wasn’t good,” he said.

He doesn’t just follow the Twins either, but baseball as a whole. Marquardt said he was fond of Mariano Rivera, who just retired from the New York Yankees.

“Nobody could hit the (expletive) ball square off him,” he said. “And he threw the same pitch all the time, that’s amazing.”

Marquardt also picked up golf in his 40s, and still plays nine holes five times a week. He has two hole in ones.

“It’s a nice game, if you can play it good,” Marquardt said.

He will be going to Panama City Beach, Fla., in a couple weeks to go golfing with his sons.