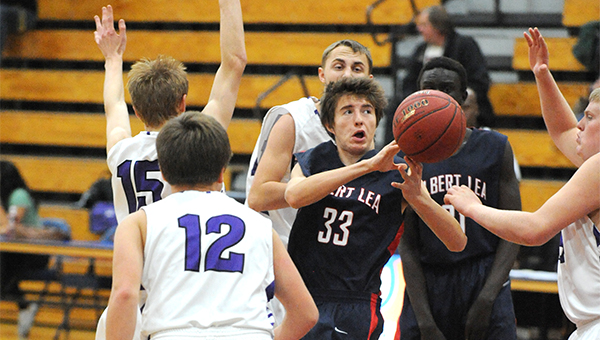 Cal Adams of Albert Lea is fouled as he drives to the basket Tuesday in the Tigers’ season opener against Red Wing. Albert Lea lost 59-36. — Micah Bader/Albert Lea Tribune

The Albert Lea boys’ basketball team showed flashes of potential in its season opener, but Red Wing was able to pull away in the second half on Tuesday to beat the Tigers 59-36.

Albert Lea head coach Lucas Kreuscher said he hoped to utilize the speed on this year’s team by forcing more turnovers and scoring in transition. 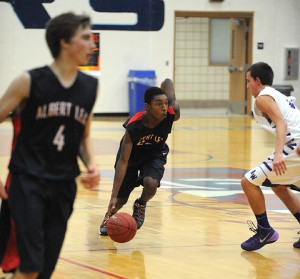 “We weren’t as active as we needed to be on defense, and that didn’t allow us to get out and run,” he said.

The Tigers controlled the game for the first few minutes and took a 2-0 lead when Cole Keyeski drove to the basket and scored. Albert Lea led until the Wingers hit a 3-pointer to take a 5-4 lead, and Red Wing held the advantage the rest of the way.

Cold shooting from the field hampered Albert Lea in the first half, but the Tigers were able to crash the offensive boards and score on multiple putbacks. Tesloch Kuey caught fire for the Tigers by hitting two 3-pointers and scoring 12 points in the first half. He finished the game with a team-high 14 points. Kuey said he hopes the team will utilize more effectively the coaching advice Kreuscher and the coaching staff teach in practice.

“We need to put what we learn in practice into the game,” he said. “I’m always working on driving to the basket and trying to improve.”

Red Wing snuck in a basket a fraction of a second before the halftime buzzer to push its lead back to double digits (33-22) and stifle any momentum Kuey and the Tigers built.

In the second half, Red Wing’s lead ballooned to as many as 25 points.

The game was a rematch of Albert Lea’s final game of the season last year in the first round of the Section 1AAA tournament, which was decided in the final seconds. The Tigers led 56-55 in that game with 3.5 seconds left in regulation. However, they were eliminated when Red Wing managed four points in those final three seconds because of an Albert Lea foul and turnover to win 59-56.

The Tigers’ top four leading scorers graduated last spring, while the Wingers brought back all of its starters, Kreuscher said.

“It was a tough matchup for our first game,” he said.

Albert Lea was Red Wing’s third opponent this year. The Wingers pummeled Faribault 71-49 in the season opener and beat Byron 63-51 on Saturday. Both games were at Red Wing.