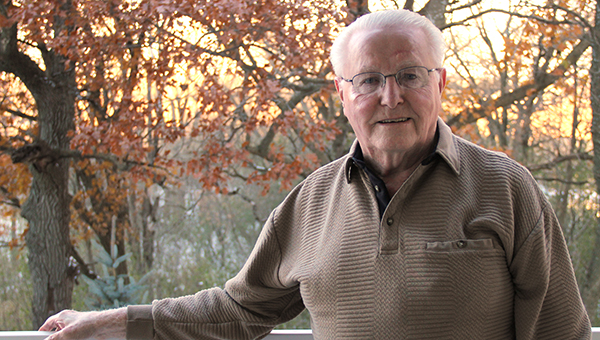 For Red Mershon, the Village Cooperative in Albert Lea has been a great home, and the other residents are like a big group of brothers and sisters.

Mershon has lived at the Village Cooperative since 2006. This past year he was named treasurer, so he’s been busy signing checks and watching the finances. He’s not sure if he will continue serving on the board, but he has enjoyed it.

He said the residents there like to stay active, and every month each floor puts on a supper for the whole building. There are 50 apartments at the Village Cooperative, and Mershon guessed there are 75 to 80 residents.

“That’s a lot of birthdays,” Mershon said with a smile.

“Every night of the year there will be people playing 500 or dominoes,” Mershon said. “They’re real active.”

Mershon has enjoyed his years living at the Village Cooperative. Right now there’s a waiting list to live there, and Mershon isn’t surprised.

“They run this place as good as you could possibly imagine,” Merson said of the staff at the Village Cooperative.

He moved there in 2006 with his wife, Jan, but in December of that year she was diagnosed with pancreatic cancer. He misses her dearly.

“You can’t believe the way it changes your life,” Mershon said of losing his spouse of 48 years.

Mershon is a 1951 graduate of Wells High School where he was active in sports. After high school he was drafted into the Army and served in Korea. He served for eight months in the U.S. and for 16 months in Korea. His job was to calculate commands for firing heavy artillery, and he said now a computer surely does those tasks.

He met Jan, who was from Lake Mills, and they were married. Mershon then worked at Wilson & Co. before his friend, who was post master at the time, recommended he take the postal service test and apply for a job. For the next 30 years Mershon delivered mail.

“I think I’ve been to every house in Albert Lea at least once,” Mershon said.

Now he’s been retired for 15 years, but he keeps busy. He used to bowl and golf, but arthritis put a stop to that. He was a pretty good bowler, with high scores in the 290s, but he never did get a 300. Seven different times he had 11 strikes in a row and missed the last one. Though he liked golf, he doesn’t think he was very good.

He enjoys going to church at Ascension Lutheran Church and visiting other churches for soup and pie suppers. He and his friends like to go out to eat or visit Diamond Jo Casino, too. Mershon reads frequently and follows the Minnesota Twins, Vikings, Timberwolves and the Gophers.

“I never got into hockey,” Mershon said.

He and Jan had two children. Rick is married to Jodi, and they live in Dallas, Texas, with son, Jack. Lori married Ray, and they had children, Casey and Nicole. Mershon said he loves seeing his great-grandchildren, Nicole’s 2-year-old twins Izaak and Keith. There’s another great-grandchild on the way, and Mershon is excited to have another addition to the family.

Mershon is a member of the Golden KII Kiwanis Club, which meets at the Freeborn County Historical Society. He enjoys the new addition to the museum and the updated meeting areas.

“Boy is it a nice addition,” Mershon said.

He enjoys no longer having to worry about shoveling snow or mowing grass because he was pretty particular about it when he was a homeowner. And though he grew up in the area, he never knew where Goose Lake was. Now all he has to do is look out his window to see it.