Area residents woke to falling snow this morning in what was the first snowfall of the season. 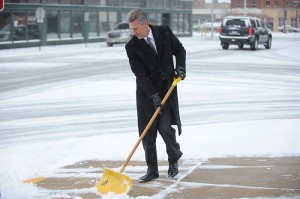 Doug Peterson of the Peterson-Savelkoul-Haedt and Benda law office scoops snow off the sidewalk this morning. —
Micah Bader/Albert Lea Tribune

Snow showers were expected to end at about 11 a.m. with the remainder of the day becoming mostly sunny. The National Weather Service stated accumulation of less than a half inch was possible, and Albert Lea appeared to have reached that by 8:30 a.m.

The snow caused slippery conditions, and several crashes and stuck vehicles were reported. A semitrailer was reported stuck on the hill on Broadway. Some downtown building owners braved the cold to clear off their sidewalks.

Winds are expected to be blustery, with gusts up to 26 mph.