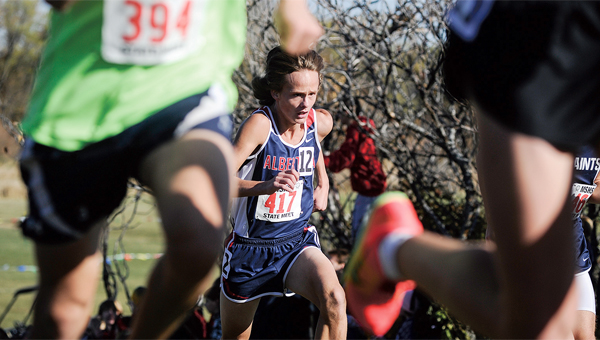 Goodell, a sophomore, finished in 92nd place in a field of 174 runners on the campus of St. Olaf University in Northfield.

“The coaching staff is so proud of Jackson,” Haney said. “He ran a great race and did what we asked him to do. He started fast and worked his way through the pack during the middle part of the race and had a huge kick at the end.”

After finishing in the top 10 in the last seven meets of the season, Goodell aspired for a higher finish.

“It was pretty hard, and the competition was a lot faster than I’m used to,” Goodell said. “It was a learning experience.”

During the regular season, Goodell won Fairmont’s meet at Cedar Creek Park and led the Tigers to a team victory in a field of five teams. He also led Albert Lea to a first-place team finish at Mason City against six teams from Iowa by taking second place individually. Goodell earned his second second-place individual place in a meet hosted by Austin at River Oaks Golf Course on Oct. 8.

At the Big Nine Conference meet, Goodell took fifth place and led the Tigers to fourth place out of 10 teams. He followed that with seventh place at the Section 1AAA meet at Brooketree Golf Course in Owatonna — Albert Lea’s third race at that venue in October.

“He has gained confidence during the season,” Haney said. “I can see that Jackson will have a great track season, and we will use that training to get him ready for the next season of cross country. He’s dedicated and knows what it takes to be the best.”

The future is bright for Goodell. Of the 91 runners who finished in front of him, only 22 were sophomores or younger.

“He’ll be back for another two years, and he’s one of the top 10th-grade runners in the state,” Haney said. “He will continue to improve as he has a great work ethic and that inner drive to compete.”

Check the Scoreboard: Nov. 2 post to see how other area runners fared at the Minnesota and Iowa state cross country meets.