Albert Lea’s Horejsi is the state champion in two events 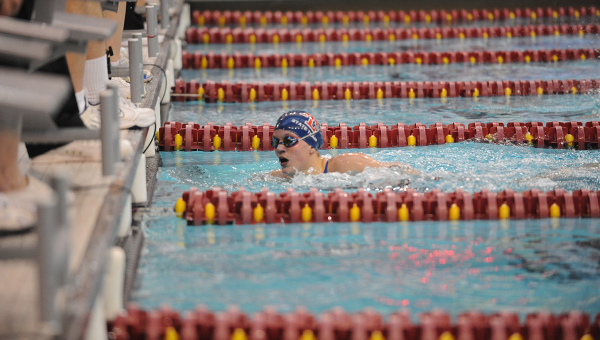 MINNEAPOLIS — When Lindsey Horejsi looked up at the scoreboard to see her time in the 200-yard individual medley, the other seven swimmers were still plowing toward the finish line.

“Lindsey swam another double zero (she swam a 1:00.24 Tuesday during the state preliminaries), which is really tough to do,” said Albert Lea head coach Jon Schmitz.

Despite defending her state title and all-time state record of 1:00.16 in the 100-yard breaststroke and tacking on her first title in the 200-yard I.M. at the girls’ Class A state swimming meet Wednesday at the University of Minnesota Aquatic Center, Horejsi had even higher aspirations.

Click HERE to view a photo gallery of Albert Lea’s swimmers at the state meet.

“I was hoping to break some records today, and it didn’t happen,” Horejsi said. “But I swam my hardest. That was the best I could do, and I’m happy with it.”

Aside from Horejsi’s heroics, the Tigers produced four other All-State swimmers: Anna Andersen, Ahnika Jensen, Bailey Sandon and Haley Simon. Swimmers who finish in the top eight during the state preliminary round earn All-State recognition.

As a team, Albert Lea took fifth place with 130 points, just one point behind Hutchinson. Visitation won the meet with 300 points. Mankato West was second with 168. Last year, the Tigers finished in seventh place.

In relay action, Albert Lea’s team of Sandon, Horejsi, Jensen and Andersen set a school record in the 200-yard medley for second place with a time of 1:46.27, which was 0.09 seconds behind the team from Visitation.

“We swam great today as a team,” Schmitz said. “We came close in the medley. The girls all put together their best splits.”

In both relays, the Tigers earned All-American consideration, Schmitz said.

In addition to swimming in both relays, Andersen finished in the top 10 of two individual events. She took fifth place and set a new school record in the 100-yard freestyle (52.97), and she won the consolation heat of the 50-yard freestyle (24.48) to take ninth place.

Albert Lea’s previous school record in the 100-yard freestyle was set by Naomi Gregerson, who is now an assistant coach at Rochester Mayo, Schmitz said.

Also competing at the state meet on an individual level was Ahnika Jensen. She finished 16th in the 100-yard breaststroke (1:10.47). She swam in the consolation heat, and Horejsi swam in the championship heat.

“It’s really fun to have someone on the same team in the same event as you,” Jensen said.

It was Jensen’s first trip to state in the 100-yard breaststroke.

It was a great experience, and we’ll hopefully have more girls next year,” Jensen said. “We all swam awesome times.”

Albert Lea’s expectations for 2014 are high. Sandon said she hopes to qualify for state in all four of her events, a feat she almost completed this year, and Simon said she will shoot to compete in the 100- and 200-yard freestyle races at state next year.

“I’m happy with our (team) place, and this really sets us up for a big team effort next year,” Schmitz said.