ALDEN — A whopping 83 percent of voters chose to raise their taxes and support the Alden-Conger School District. 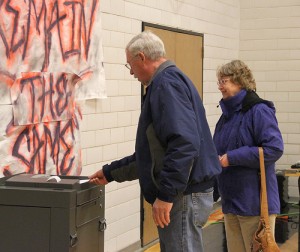 David and Liz Thunstedt submit their votes Tuesday at Alden-Conger School. Both said they voted yes for the operating levy and were glad to support the school district. — Kelli Lageson/Albert Lea Tribune

A total of 374 people voted on Tuesday; 309 yes votes and 64 no votes were cast. One more vote could not be counted because a voter marked both the yes and no boxes. Superintendent Brian Grenell said the numbers were overwhelming.

“I’ve been in education for over 40 years and I’ve never seen that kind of community support,” Grenell said. “It’s really a vote of confidence.”

Election judge Ebenezer Howe said he was surprised by the amount of voters he was seeing.

“There’s been more people voting than I thought there would be,” Howe said. “However, it’s an important election for our school.”

David Thunstedt and his wife, Liz, both voted yes. Thunstedt said his grandchildren are about to attend the school, which will be the fifth generation in his family to attend school in Alden.

“This is a strong district,” Thunstedt said. “I want it to stay strong.”

The Alden-Conger Public School asked its taxpayers for an increase in local funding. The measure on Tuesday’s ballot asked voters to revoke an existing referendum of about $600 per pupil and to approve a new referendum of $930 per pupil.

Grenell said for a home with a market value of about $75,000 taxes would increase about $140 a year.

“We have a quality program and good teachers,” Grenell said. “We just want to maintain and improve.”

“I think Alden-Conger School is very important for the students and for the community,” Sipple said.

Sarah Johnson came to the polls with her mom, Peggy Johnson, and said her daughter will attend the school next year, which is why she voted yes.

Alden-Conger school board chairman Doug Johnson said many school districts across the state are struggling with the amount of state aid they are getting.

“We are in statutory operating debt, but even if we weren’t in that we would still be going for a referendum,” Johnson said. “Any time you make cuts in a school you’re hurting the education of the kids.”

Alden-Conger’s current operating levy does not expire this year, but Grenell said the district wanted to take advantage of some new state aid so they went out a year early to voters.

A district in trouble

Grenell, who has been with the district since July 1, 2012, said when he started at Alden-Conger the district was in debt about $1 million and had been borrowing and was on statutory operating debt. With some cuts, including one staff person in the administrative office, Grenell said the district is working its way out of debt. He guessed the district still owes around $600,000.

“Five years from now we’ll be looking very, very good,” Grenell said. “We’re getting out of it, but slowly.”

Grenell said the new referendum will help the district get out of debt, stabilize its finances and maybe help it to offer more college classes or vocational classes.

“If it passes we can take a look at ordering textbooks and things like that,” Grenell said before the election. “If it doesn’t pass we could be looking at more cuts.”

Grenell said the district has at least half of its students through open enrollment, and he said the school must have quality programs and other reasons to draw people to the district.