Attendance is up at Marion Ross Performing Arts Center

Attendance is up at the Marion Ross Performing Arts Center.

Rory Mattson with the Albert Lea Communty Theatre board stood before the Albert Lea City Council on Tuesday to describe the work the organization has done to improve the theater.

“We feel we’ve done a little with what you’ve given us,” he said.

Mattson mentioned prior improvements, too, such as how ACT, Albert Lea Civic Music and Mayo Clinic Health System refurbished the theater with a new screen, projector and satellite receiver to show New York Metropolitan Opera. The upgrades now allow ACT to show National Theatre Live. A recent example was the Halloween night showing of “Frankenstein.”

In his report, he gave attendance figures. The theater averages 10,000 attendances a year. Before ACT took over management of the Ross Center from the city in April 2012, attendance was at 4,800 a year.

Mattson credited the upgrades and said opera has been popular.

“We are one of the few communities in southern Minnesota and northern Iowa offering this opportunity,” he said.

However, he added that the organization will ask the city for assistance with some major work.

Albert Lea Community Theatre will ask the city for upgrades to the Marion Ross Performing Arts Center sometime in the next five years. Mattson said that would be for replacing the rigging and curtain system and upgrading the city-owned sound system. 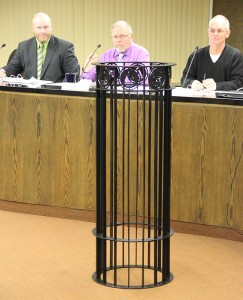 Innovance approached the city about constructing tree guards at cost and donating half of them. The city would pay $4,305.

Craig Schmidt of Innovance was at the meeting to display a tree guard and answered questions. The tree guards double as bike racks.

City Manager Chad Adams said the donation was a “significant savings” to the city.

• Heard a report from Tim Penny, president of the Southern Minnesota Initiative Foundation. He said SMIF does about $100,000 worth of activity in Freeborn County, such as small business loans, child services and community improvement grants.

• Set a date for the sale of $1,285,000 in general obligation bonds to finance the heating and cooling system at City Hall and other equipment projects. The bond sale will be awarded at a special City Council meeting at 5:30 p.m. Dec. 19.

• Authorized the city to apply for a Small Cities Development Program grant that fixes up homes in the city. The city has participated in the program since 2006.

• Appointed Brian Hensley to a three-year term on the Albert Lea Parks and Recreation Advisory Board.

• Tabled the unfinished business portion of its agenda, much of which dealt with zoning ordinances for the downtown and sign standards.

• Corrected a clerical error in the Aug. 12 rezoning of four parcels from the Interstate Development District to Limited Industrial District.