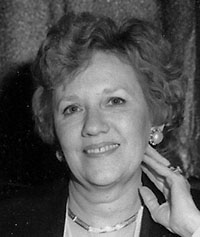 Barbara was born on May 31, 1929, in Jackson to her loving parents Ole and Stella Morkrid. Her mother was a well-respected piano teacher in the community of Worthington. It was there that Barbara grew up surrounded by music and graduated from high school in 1947. In 1948 she met and married the love of her life, Charles (Bud) Smallwood who was also a native of Worthington.

Soon after they married, they packed up and moved to St. Paul so that Bud could attain a bachelor’s degree in history. Bud attended Macalester College while working two jobs. Barbara stayed home to care for their young family of two toddlers and two infants while helping her husband study for his college courses.

After graduation, they moved back to southern Minnesota where Bud taught school. Barbara ran the busy household. She was always generous and kind. She opened the house to all the neighboring children. Bud changed careers and became a mortgage lender. He moved the family to Mitchell, S.D., where the children spent most of their formative years. Barbara remained active in musical choral groups and even directed her children in a singing group. After Bud received a promotion, they then moved to Albert Lea while Bud continued in the mortgage business. They stayed in Albert Lea for 15 years. Barbara was a deaconess of the church and spent much of her time baking and distributing food to local shut-ins and to the less fortunate. Bud and “Babs” in 1990 moved to Washington state to be near to their grandchildren. Bud worked at Peoples Bank in Lynden for a number of years.

Despite all the strength that it took to raise a family, unfortunately, Barbara was stricken with an autoimmune disease in her mid-30s that caused her to have constant fatigue. She hid her pain and suffering from her family and friends up until her death.

As a beloved wife, mother and grandmother she is dearly missed by her husband, Bud, of 65 years of marriage; daughters Cynthia and Linda; sons Todd and Lonn; and her grandchildren Lille, Camille, Leah, Shaun and Ariel. She will be mourned by all of her beloved friends and extended family.

Rest in peace. Her family’s love will be with her always.