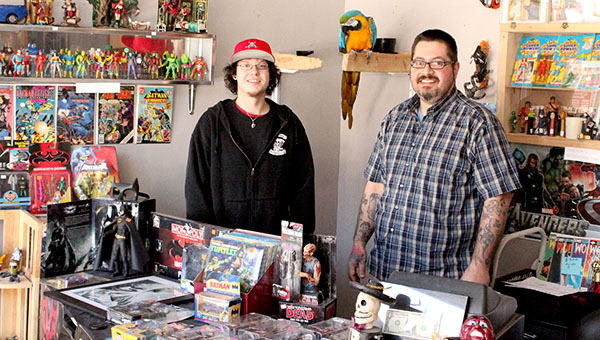 With more than 40,000 comic books in his personal collection, one Albert Lea businessman decided it was time to share with others.

“The comics literally took up an entire room in my house,” said Gilbert Johnson Jr., owner of The Chapel Comics & Collectibles Shoppe, which opened Oct. 31. “I figured I can’t read all these so it’s time to open some stuff.” 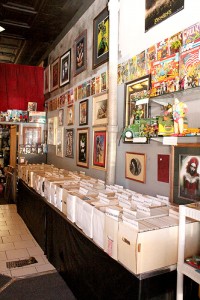 There are about 40,000 different comic books to choose from at the shop. — Brandi Hagen/Albert Lea Tribune

Johnson, known for his tattoo business at 115 S. Broadway, said his comic book collection actually started because he had a passion for collecting figurines. The comic book store is in the front of the building, while the tattoo studio remains in the back.

He received his first action figure at about age 4. It was made by Fisher Price, and he still has it in his collection today.

“That’s where it really started,” Johnson said. “The comics just go hand in hand. If you’re playing with a superhero, you’re going to want to know about him.”

Johnson said much of his collection has come from trading tattoo work for comic books. The shop offers figurines, comic books, toys from the 1970s and 1980s, artwork and remote control toys.

Johnson said opening the shop wasn’t a hard decision because he already owned the building and a lot of the merchandise.

“There’s no reason I’d have to close,” Johnson said. “I don’t have to make money to keep the door open.”

When the store opened on Halloween, Johnson and his employee, Casey Olson, made it into a themed grand opening.

There was a goodie bag of comics and an action figure for 100 boys and 100 girls instead of a piece of candy, a costume contest with prizes, pumpkin painting and comic book-themed food made by Kim Olson of Grandma’s Gourmets.

A 2-year-old with detailed face paint who was dressed up as The Joker won the costume contest. Olson said almost all of the goodie bags were gone by the end.

With the shop, Johnson and Olson hope to give children a place to go that Albert Lea doesn’t already offer. And the two hope that it will get kids interested in reading something they might not be able to get at a library.

The shop has a few programs in place to encourage its audience. The first is a free membership customers can sign up for that gives them a discount every time they shop in the store. Olson said there are already 47 members on the list. 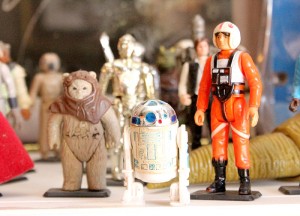 Star Wars figurines are some of the ones that The Chapel Comics & Collectibles Shoppe offers to its customers. The shop has figures from the ’70s and ’80s. — Brandi Hagen/Albert Lea Tribune

The second is a trading program, almost like a rolling library, Olson said. Customers can bring in a comic book, have the value looked up and trade it in for one of equal value to take home and read.

“The thing is, is that you buy a comic and read it and then it just sits there,” Johnson said. “Unless you’re into collecting, that’s just going to sit there and collect dust. This way, you can continue to expand your reading horizons, try new things out and see what you like.

And, Johnson continued, “Younger kids who are starting to get into comics can come in, buy their first comic and never stop reading until they are through the whole collection if they want.”

Because reading is so necessary in everyday life, it is nice to have kids interested in reading and at the same time learning the good things that comic book characters like Superman and Batman did, Olson said.

“We’re hoping to bring in a lot of kids and keep them out of trouble,” he said.

The third program set to begin on Dec. 26 is free comic book day. Olson said on the last Thursday of every other month customers can stop in and get one free comic to take home.

“If they get one comic book, they might get really into it and come in and get the rest of the series,” Olson said.

So far, Olson and Johnson have had good feedback on the shop, and customers young and old have stopped by.

“People come in to re-live their childhoods,” Olson said.

And, others, Johnson said, have been parents who have shown their child what they did for fun when they were the same age.

Sometimes, though, people look in the storefront window and keep walking because they see, or know, that the building is also a tattoo studio.

“They shouldn’t be scared to come in, though,” Olson said. “It’s not going to hurt our feelings if you walk in and walk right back out. Just come in and check it out.”

The way the building is set up, both businesses have their own space so the tattooing isn’t in sight of the comics and collectibles.

Johnson said the shop is willing to help customers value their own items or track down an item that they can’t find.

The store hours are Tuesdays, Thursdays and Saturdays from noon to 7 p.m. It can be reached by calling 369-3712.