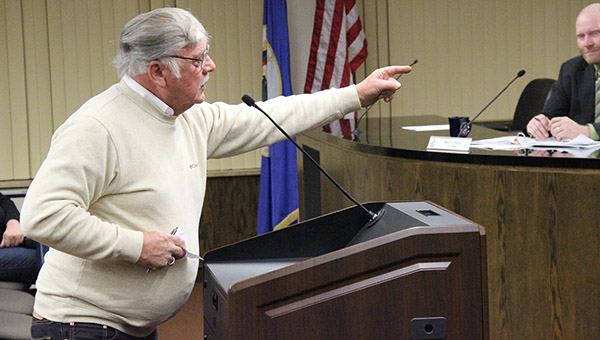 Albert Lea resident Ken Mulgrew talks with his hands while standing before the Albert Lea City Council on Tuesday. He is telling a story about skateboarders and bike riders trespassing on a private drive near the City Beach. — Tim Engstrom/Albert Lea Tribune

The skate park issue is headed back to the staff of the Albert Lea Parks and Recreation Department for further research, the Albert Lea City Council decided Tuesday after hearing debate.

Second Ward Councilor Larry Baker, who motioned for the issue to go back to staff, asked for the staff to finish its research to compare proposed locations for the skate park near the end of the coming winter. 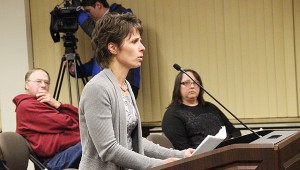 Albert Lea resident Vicki Larson on Tuesday shares information with the City Council on why the skate park should remain at the City Beach. — Tim Engstrom/Albert Lea Tribune

The hearing was open to residents. Four spoke against keeping the skate park at City Beach, and three favored leaving it in place. Other places mentioned for the skate park were the tennis courts at Frank Hall Park next to the city pool, an industrial area or simply not in a residential neighborhood.

“We are getting enough petty vandalism as it is,” said City Beach neighborhood resident Cindy Gilbert.

She told the council residents are not calling 911 when skaters are present outside posted times or causing other troubles. She said they often use the business line and know police have more important matters to address.

Gilbert said she moved to Albert Lea from Mason City, where the park is along a bike path away from homes.

She said beach-goers cause no problems, and she would like to see the beach developed more to give them more to enjoy.

Gilbert said the noise levels of thumping, grinding and riding rails disturb the otherwise peaceful neighborhood. She said it sounds like two-by-fours being dropped.

“The cars are creating more noise than the skate park, and the cars are not going to go away,” she said. 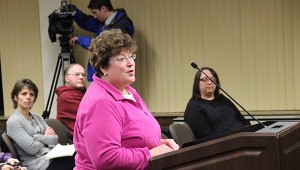 She said she spoke with the county assessor, who told her the skate park has no effect on home values.

Larson said she feels having the skate park at Frank Hall Park near the Kiwanis Basketball Court and the pool would be a poor mix of age groups. She read off incidents in 2013 at Frank Hall Park, from knives on the ground to fights to cars whipping circles to lost children.

Larson spoke with a planner from the Twin Cities, who feared moving the park would send a message to the young people in Albert Lea that “you are a nuisance and you need to be move out of the community.”

She proposed a sound wall at the park to deaden unwanted noise, and she suggested neighbors post an acoustic fence, which have grown in popularity.

Resident Gary Hagen said the city spent money to spruce up the Freeborn National Bank Building and said now neighbors are asking the city to spend to move the skate park and help improve the neighborhood.

David Karge resides across from Frank Hall Park said the nearest tennis courts are at the high school and middle school and taking out the courts by the pool would leave many players young and old without courts. He said tennis players need to learn at an early age.

He said he has concerns with how busy Frank Avenue has become, with increased traffic and semis taking it as a shortcut.

Resident Ken Mulgrew resides on Clausen Drive, a private drive near the skate park. He told stories of asking skaters and bikers to avoid trespassing on the drive and the foul reactions he receives. He said he moved to Albert Lea from Dubuque, Iowa, in 1999, when there was no skate park.

“We loved the beach. You couldn’t get a finer, more beautiful place in town,” he said.

And he still loves it, but he said when the skate park was built in 2001, there were plans to have it be supervised. Mulgrew said in Austin the skate park in by Hormel Foods in a nonresidential area.

“We’ve already raised our kids. Why should we raise anymore?” he asked.

Sharon Nelson lives near the skate park and began the first petition to move it. She said she started it because she wanted peace and quiet. She couldn’t take her two grandsons to the skate park, and now is uncomfortable taking her four great-grandchildren there.

“I want Albert Lea to have a skate park, but you cannot put bikes, skateboards and scooters in one area. Why not move it to one where it is big enough for all three?” she said.

Nelson said she doesn’t want the issue to be neighborhood-against-neighborhood.

Janelle Tuttle resides in Albert Lea but not in or near either the City Beach or Frank Hall Park neighborhoods. She suggested putting up a camera to deter breaking park rules.

She said her son enjoys BMX bikes and they have visited skate parks all over the region and competed in many contests. She said she doesn’t want the issue to become a matter of a generation gap.

“I’d be very happy to have this skate park in my backyard,” Tuttle said.

“Everybody on this issue is correct,” he said.

Third Ward Councilor George Marin said when Stan Sevaldson spearheaded the addition of a skate park to the city, he had wanted it at Frank Hall Park on a tennis court, but supporters of tennis fought against it. The decision was made to have the skate park replace an old tennis court at City Beach. He, too, said having more information will allow a better decision.

The Albert Lea Parks and Recreation Advisory Board voted on Sept. 16 to recommend that the city relocate the skate park to Frank Hall Park. The board revisited the issue Oct. 21, receiving comments from people who wished for the skate park to remain at City Beach.