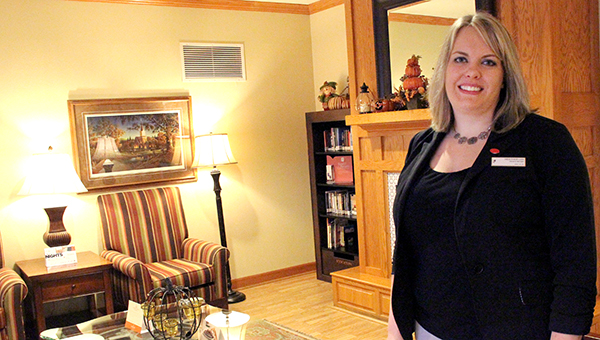 Heather Lee, general manager at Country Inn & Suites in Albert Lea, stands in the lobby last week at the hotel. Last month the business was awarded with the Medium Business of the Year by the Albert Lea-Freeborn County Chamber of Commerce. –Sarah Stultz/Albert Lea Tribune

For that reason, along with their involvement in the community, the hotel last month was named Medium Business of the Year at the annual banquet of the Albert Lea-Freeborn County Chamber of Commerce.

“We’re honored to know that our community felt that way about us, that they enjoy having us here,” said Heather Lee, general manager. “It’s a privilege.”

It features 77 rooms over three floors, along with a pool, a business center, a fitness center and a meeting room.

Each room has a microwave, refrigerator, coffee maker and hair dryer, to name a few amenities. 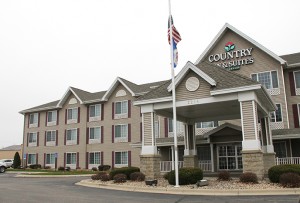 In addition to its customer service, the hotel is a part of multiple community efforts.

It hosts the Eddie Cochran drive-in social and hosts the haunted Halloween carnival in collaboration with Power 96, Lee said.

It donates all of its sheets and towels with defects to area groups who make quilts out of them and donate them to Semcac, the Humane Society and other locations.

She said the hotel donates its old soap to a global project, where the soap is melted down, sanitized and reformed and then sent to third world countries.

For Thanksgiving and Christmas, it sponsors a Sharing the Spirit program, where it provides rooms for families visiting loved ones in hospitals, nursing homes or treatment centers on Thanksgiving, Christmas Eve or Christmas day.

“I think it’s amazing that we can do that for our community,” Lee said.

Before coming to the hotel, Lee worked at Perkins for eight years finishing as the general manager. She said one day she saw an ad in the newspaper for the position and thought it would be a good fit. She wanted a job that allowed her to spend more time with her family and be more involved in the community.

And that she has.

She said she enjoys her job because there is always a challenge.

“It’s new every day,” Lee said. “You get to see new people and get to interact with new people.”

LuWanna Joel, head housekeeper, has been working at the hotel since it started.

Lee said the hotel serves people from all offer the country and even some from other countries.