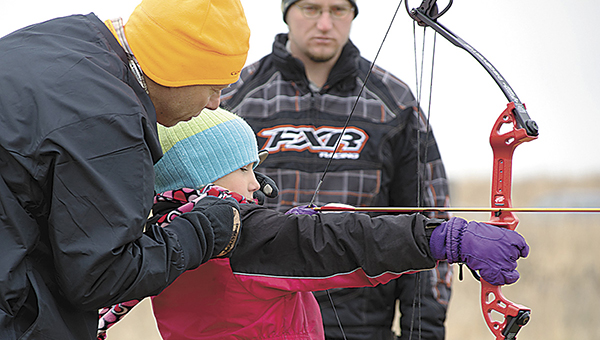 You could hear rain blowing against the tent that flapped in the chilly wind during Governor Mark Dayton’s remarks to the crowd of bundled-up deer hunters, media and local officials Friday at the West Otter Tail County Fairgrounds.

The governor ended his speech at the luncheon for the 11th annual Governor’s Deer Hunting Opener by providing a weather report for the next morning’s hunt: 25 degrees.

Mark Johnson, executive director of the Minnesota Deer Hunters Association, called it “great weather. Deer hunting weather,” which got a few cheers from the crowd.

Though Dayton isn’t a deer hunter, he supports the longstanding tradition that goes back multiple generations, he said. Dayton grew up going duck and pheasant hunting near Worthington with his father and brother. 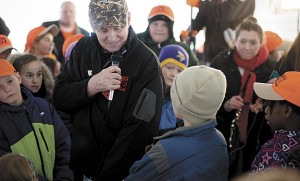 Fergus Falls students crowd around Governor Mark Dayton to ask questions after listening to him speak Friday at the fairgrounds. The governor was in town this weekend for the opening of deer hunting.

Afterward, he met with the fourth- and fifth-graders who were part of the youth field day at the Prairie Wetlands Learning Center. He held an informal question-and-answer session with them, where a few kids asked if it’s hard being the governor.

“It’s not hard to be governor on a day like today,” Dayton said. “This is pure fun. My favorite part about being governor is all of you.”

Other questions from the kids ranged from what kind of gun does he use (a 20 gauge for pheasants, 12 gauge for ducks, when he was younger, he said), to did he always dream of being a governor?

The short answer is no, he didn’t.

“When I was your age, I wanted to be the starting goalie on the Olympic hockey team,” Dayton said.