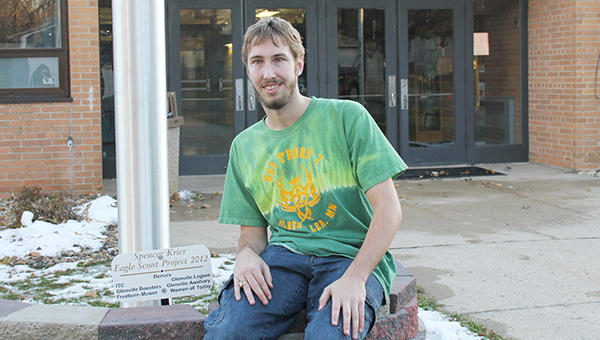 Spencer Krier sits on the landscaping around a new flagpole he installed for his Eagle Scout project at Glenville-Emmons High School. –Kelli Lageson/Albert Lea Tribune

Spencer Krier, 19, installed a new flagpole for the American flag at the school and refurbished the old flagpole with a new Minnesota flag. He then redid all the landscaping around both flags. For this project he will receive his Eagle Scout status.

The project was completed last summer, but the ceremony for Krier was on Sunday at First Lutheran Church in Glenville. Krier had to take the Eagle Scout oath and give a presentation on his project. He said it wasn’t hard to think of a project to complete.

“I’m very patriotic,” Krier said. “And I wanted to do something for the school.”

The flagpole that was standing had been installed by the class of 1963, and Krier said the brick around the flagpole was falling apart. He needed a lot of help, and credits his troop leaders, Doug Lind and Don Vanderploeg, for keeping him interested in Scouts.

“I couldn’t have done it without the donations,” Krier said.

As a thank you to the Legion for its donation, Krier helped organize a sloppy joe supper and proceeds helped fund the new veterans memorial at the Bohemian National Cemetery.

Krier graduated from Glenville-Emmons High School in May. He said he enjoyed his time at the school and was involved in many activities.

“I like to take pride in my school,” Krier said.

Krier was in choir, band, FFA, Scouts and Youth Advisory Council, among other activities. He was the treasurer for Freeman 4-H before the club disbanded and was active in county fairs with that club. Krier said he is active at St. Theodore Catholic Church as well.

He works in the kitchen at Applebee’s in his spare time, and plans to attend Riverland Community College in the spring to complete general courses. He then wants to attend the University of South Dakota to obtain a political science degree.

Family: His dad, Bob, is vice president at the Citizens State Bank of Glenville, and his mom, Holly Clarke, is a social worker. Krier also has a 15-year-old brother, Nicholas Krier, and a 13-year-old stepsister, Katelyn Pickens.

Interesting fact: Krier has been interested in politics since he was in kindergarten and actively writes to legislators, representatives and even sometimes the president.