Corn is marching northward in Minnesota, spurred in part by higher prices from the ethanol boom and by new varieties that mature before the frost sets in.

That means new opportunities for producers like Gary Purath, a fourth-generation farmer who grows corn, soybeans and wheat and raises Angus cattle near Red Lake Falls in northwestern Minnesota. It’s a region where growing corn used to be too risky because of the early onset of winter, where previous generations of farmers might have played it safer with barley or oats.

But it also means land set aside for years in the federal Conservation Reserve Program sometimes gets plowed in favor of corn. That disturbs Dan Svedarsky, director of the Center for Sustainability at the University of Minnesota-Crookston, who has followed land use trends there for over 44 years. He said he has seen a “massive transfer” of erodible land in the region from conservation into corn and soybeans in just the past two years.

“People have become wealthy due to the boom in crop prices,” he said. “That’s a good thing. That’s what drives our economy. But it has not come without a price.”

That price includes not just water quality, as runoff carries topsoil and chemicals from fields that return to production, but water quantity as well. The additional drainage coming off those fields means more water flowing into the already flood-prone Red River Valley watershed, Svedarsky said.

Nitrogen and phosphorous eventually flow north into Canada’s Lake Winnipeg, where they contribute to thick algae blooms that can be toxic.

As such consequences play out nationally, environmentalists and many scientists have concluded the costs of ethanol outweigh the benefits. The Obama administration has taken to highlighting ethanol’s benefits to agriculture instead of pitching it as an environmental strategy for reducing greenhouse gases.

Ethanol backers say the fuel additive remains better for the environment than gasoline alone. They are fighting efforts by oil companies and environmentalists to scale back requirements that ethanol be added to the gasoline supply.

The Conservation Reserve Program pays farmers to take environmentally sensitive land out of production. Figures compiled by the AP show steep declines in conservation acres in several northwestern Minnesota counties from 2006 to 2012 at the same time that corn acreage there grew by triple-digit percentages.

The conservation land isn’t all becoming cornfields. Soybeans are a bigger crop than corn in the region. Most acres in the region that have begun producing corn were never in the program but formerly grew wheat or other crops that are less profitable today, farmers said.

And new, faster-maturing corn makes it less risky to plant on northern acres where wheat, barley and oats were better bets in years past.

On top of all that, the region has become warmer and more humid, and its growing seasons have been getting longer, factors that all lend themselves to corn production.

Like many farmers and other landowners in northwestern Minnesota, Purath — who was elected earlier this year to the board of the Minnesota Corn Growers Association — enrolled part of his acreage in CRP years ago when the program offered a better deal than growing crops or renting the land to other farmers who did.

With corn prices high, the economics have swung back in favor of farming. He recently pulled about 200 acres out of the program and is growing corn and other crops now. 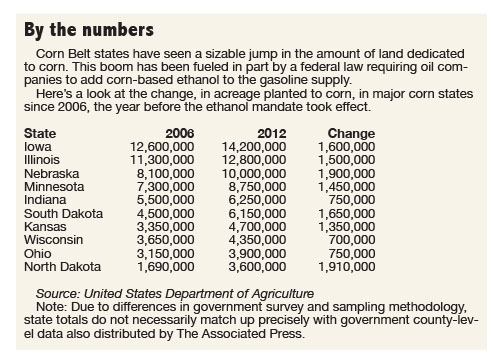