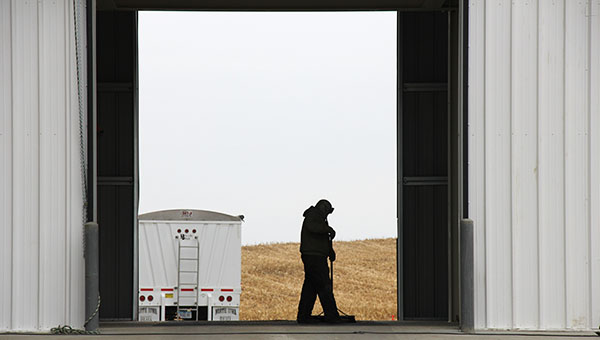 A Five Star Co-op employee sweeps grain into the dump pit Tuesday at the new $4.5 million grain elevator in Scarville, Iowa. Trucks can drive through, rather than having to back out after dumping. — Tim Engstrom/Albert Lea Tribune

Teresa Nicholson lives on the blacktop between Scarville and Lake Mills. She is the executive director of the Winnebago and Worth Counties Betterment Council, an economic development agency better known as Winn-Worth Betco. 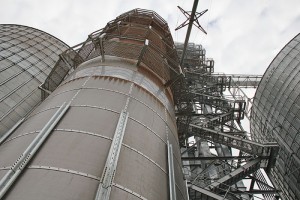 The new grain storage facility in Scarville, Iowa, tops out at 160 feet tall. Officials with Five Star Co-op gathered in Scarville last week to present the facility to the news media. It opened in mid-September. — Tim Engstrom/Albert Lea Tribune

“I see trucks headed to Scarville all day,” she said.

The grain storage capacity at the five-acre facility this year went from 250,000 bushels to zero to just shy of 1.1 million. The new facility opened in mid-September, and the three grain bins can be spotted from miles around. The top of the structure reaches 160 feet.

In fact, it opened without electricity from Alliant Energy. Eastern Region Manager Matt Litwiller said because Five Star had promised to have the facility ready for the fall harvest, they brought in generators to make sure the place was operational.

The first farmer to deliver a load of grain was Doug Harmon of Scarville.

Five Star Marketing Manager Bob Wagner said the elevator workers now are seeing many new faces and ones they hadn’t seen in a long time. The old facility only stored soybeans and wasn’t kept at full capacity.

Work on the structures began in the spring, but the concept to build a new storage facility moved to the front burner about three years ago, said Five Star board member Randy Greiman of Garner, Iowa.

However, he cited a key community meeting with farmers at the Scarville fire hall in October 2012. 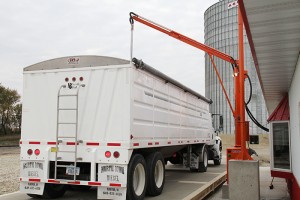 “We shared our thoughts. We told them if we could get financing, we could do it,” he said. “The community was receptive.”

Board member Dave Newman of Burchinal added: “Demand was huge.”

The new elevator isn’t the only news. Five Star board members gathered in Scarville on Tuesday to talk about the new elevator and to announce their plans to install a 24-hour card-operated fuel station — commonly called a cardtrol — on the elevator grounds. There is no fuel available in the small town, and residents must drive to Lake Mills, Emmons or Kiester for fuel.

The Five Star board last summer approved moving forward with the cardtrol project. The station could offer regular unleaded fuel options and a blender pump for E-85 ethanol, he said. The fuel business doesn’t provide much prosperity for Five Star, he noted, adding the cooperative cares about the quality of life in rural communities.

“We are here not just to turn dollars,” Greiman said. “We are here to be part of the community.”

Five Star has cardtrols in Lawler, New Hampton and Hanlontown. Board members mentioned plans to build a $10 million fertilizer plant in Joice.

Wagner said Five Star has about 150 employees across its locations, though the number goes up and down with the seasons. There are two full-time workers at the Scarville location, and three to five who work seasonally, usually during the fall harvest.

He said the employee handbook allows workers time off to serve as volunteer firefighters, medical personnel and other community needs.

“We encourage community service,” Wagner said. “In rural areas, no one else is going to do it for them.”

Scarville had been a seasonal location until the upgrade. The property became part of the Five Star Co-op when the cooperative purchased Joice-based Top of Iowa Co-op in 2005.

Some of the trucks rolling into Scarville were part of the Five Star Co-op fleet. The cooperative has 30 semis that will pick up the harvested corn and soybeans at the farms, and it has about 35 additional trucks leased out for the season.

Greiman said Five Star was a pioneer of sending trucks to the farm. It was done so that farmers had more time to harvest, rather than stopping to haul grain trailers to town behind a tractor.