Foreign defenseman leads the Waldorf Warriors on the ice 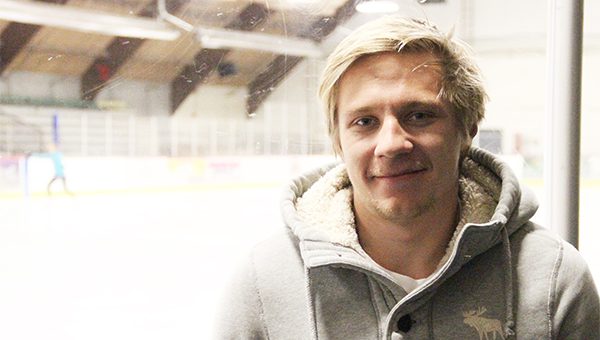 Artem Savelvev, a defenseman for the Waldorf College men’s hockey team, stands by the rink at Roy Nystrom Arena in Albert Lea before a practice. Savelvev is a freshman originally from Tver, Russia. — Drew Claussen/Albert Lea Tribune

When Waldorf hockey freshman defenseman Artem Savelvev laces up his skates and takes the ice at Albert Lea City arena, he’s a long way from home.

Savelvev, who was born in Tver, Russia, played in 20 games for the Warriors this season and has five assists.

Savelvev had a long journey to the small college in northern Iowa, considering he’s only 20 years old.

He started playing hockey when he was 6 years old and played in his hometown before moving 300 kilometers away to play on a different team.

“When I turned 12, me and a couple guys went to a different team, because it was a better team,” Savelvev said. “We lived in a hockey house for four years there. So yeah, I kind of moved out early.”

After four years with the Russian team, Savelvev moved to Canada before moving to the United States to play junior hockey. He described the decision to leave Russia as “kind of random.”

“When we went to Canada, I didn’t expect to stay here,” He said. “So I just had a suitcase with a little bit of clothes, and then I got invited to a camp in the U.S. so I just went right to the U.S. I didn’t really speak any English at that point.”

After Canada, Savelvev went to Cape Cod, Mass., and played in an international junior hockey league for one year.

“We had a couple Russian kids there, so that helped,” Savelvev said. “The next year I went to prep school in Maine to get my language better.”

After a year in Maine, Savelvev played one season for the Salt Lake City Moose, a Tier 3 Junior A hockey team in the Western States Hockey League. Savelvev had five goals and 12 assists in 45 games last season for the Moose. Playing for Salt Lake, in a way, led him to Waldorf this season.

“A buddy of mine coaches down there and told me about him,” Waldorf head coach Brett Shelanski said. “And I went down to the WSHL showcase in Las Vegas and watched him play and liked him. Things kind of went from there, I just started the recruiting process and got to know him, and that’s how it happened.”

Savelvev settled into his new surroundings off the ice.

“The school is good,” Savelvev said. “It’s a small school, so you get a lot of attention from the teachers.”

He also impressed his coach so far on the ice.

Waldorf currently has a 10-7-3 record, and had a little more than two months of games on its schedule.

Savelvev is an only child, and his parents still live in Russia. He recently was able to see his father when he was in Chicago for business. He talks to his parents over the phone every day and is planning to go home during Christmas break.