Founder of Stadheim Jewelers recalls how he built business 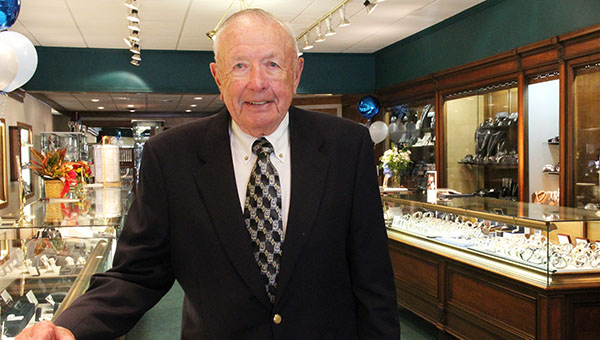 At the age of 25, he went to work as a watchmaker and jeweler in Fred’s Diamond Shop in downtown Albert Lea.

Little did he know that his job at that small diamond shop — in the lobby of the Freeborn National Bank Building — would launch him into the jewelry business for the remainder of his life. 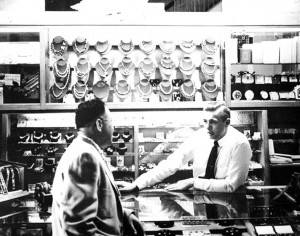 Arnold Stadheim, right, is seen here when he first went into the jewelry business in the 1950s. –Submitted

In 1953, he purchased the diamond shop from its owner, Fred Goers, and opened Stadheim Jewelers. In 1969, the business moved two doors south to 215 S. Broadway, where it remains standing today.

Looking back over the history of the business, as the jewelry store last week celebrated its 60th anniversary, Stadheim said he has enjoyed selling jewelry — particularly to multiple generations of the same family.

“I’ve enjoyed the fact of how jewelry is passed on,” he said.

He still remembers who he sold his first diamond to, and said there have since been two more generations in that family who have come into the store to buy a diamond.

Stadheim said he and his family have tried to treat customers like friends and family and offer them the best value.

“We’re a firm believer of quality jewelry,” he said.

The business believes in quality so much that over the years and continuing today, someone from the business goes overseas to buy the diamonds directly from the cutters. The major gem markets are in New York, Antwerp, Bangkok, Switzerland, Hong Kong and Germany.

Arnold Stadheim’s son Mark said the company is one of a few family owned jewelers in the country who has a site agreement with a South African diamond mine.

Though he retired from the business 10 years ago, Arnold Stadheim often still stops by the store in Albert Lea. 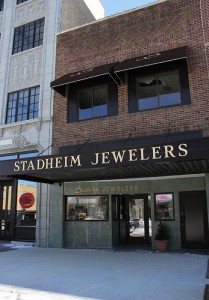 His children Mark Stadheim, Beth Ordalen and Jeff Stadheim own and operate the business now.

Mark Stadheim and Ordalen are at the Albert Lea location, while Jeff Stadheim is in Mason City. The Albert Lea store underwent renovations this summer.

When Arnold Stadheim is not at the store, he can sometimes be found walking around Fountain Lake, visiting with family or playing a game of golf.

In the jewelry industry, Stadheim has served in a variety of leadership positions including as president for the Minnesota Retail Jewelers and a director for the American Gem Society and the National Jewelers of America. Locally, he has been involved with Kiwanis, the Chamber of Commerce, the Albert Lea Family Y and First Lutheran Church.

Interesting fact: Stadheim enjoys golfing, being with his family and watching television. One of his favorite TV shows is ABC’s “Shark Tank.”