Freeborn County launched a new website Friday after about 10 years since its last upgrade.

The site — at www.co.freeborn.mn.us — was designed by contracted company CivicPlus of Manhattan, Kan., for about $13,000, which included site design, on-site training and technical support. 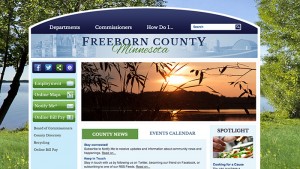 Freeborn County Administrator John Kluever said the goal of the new site was to give residents something that is more modern while at the same time easier to use. He said the former site was difficult to maintain.

“I think it’s a much better site in terms of the aesthetics of it and the functionality of it,” Kluever said.

At the top are pull-down menus where people can look up information about each county department and the county’s commissioners, along with links to information on how to do common tasks such as paying for delinquent taxes and applying for licenses.

There is a page dedicated to schedules and videos of Freeborn County Board of Commissioners meetings and a slideshow of seasonal photos.

Kluever said the site is a work in progress and will be updated in the coming weeks. The social media links are not yet completed.

Ultimately, he said, residents will be able to pay their county bills online, including taxes in the future.

People can sign up for notifications within each department such as burning bans from the Sheriff’s Office, road closures from the Highway Department or flu shots from the Public Health Department.

“I’d encourage people to go there and give us feedback on what they like and don’t like,” he said. “The site is evolving even as we speak.”

Kluever said the new site has been in the works since July when a group of county employees began meeting with CivicPlus representatives.