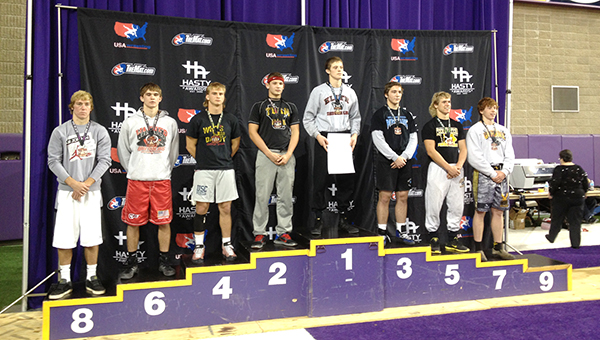 “It was a great day of wrestling to see some of the nation’s best on the mat,” said USC head coach Marcus Eytcheson. “It’s always exciting to watch our boys compete in the offseason when I get the chance.”

Colten Carlson led the Rebels with a fourth-place finish. According to Eytcheson, Carlson won his first match by a 2-0 decision, and lost his second match 10-8 in overtime against Connor Price of Wisconsin. Price went on to take second place after losing the championship match.

Carlson rebounded with five straight wins on two falls, two decisions and a major decision, before losing by a 5-1 decision in the third-place match, Eytcheson said.

Dylan and Derek Herman also competed at the meet.

Dylan pinned Everett Komrosky of North Dakota but had to fight his way through wrestlebacks after a loss to the eventual tournament runner-up Bryce Steiert of Iowa, Eytcheson said.

Derek led Shea Hartzler of Iowa 4-1 until he gave up a fireman’s carry. He lost 11-4 and fell in his first round of wrestlebacks.

“Derek was in both matches, but he just couldn’t get things going,” Eytcheson said.

USC starts its season with a home dual against Blue Earth at 7 p.m. Dec. 5. Albert Lea begins its season at the Raider Duals at Hastings at 9:30 a.m. Nov. 1 against Monticello, Scott West, Medford, Stillwater, Hastings, Prior Lake and Coon Rapids.