He bikes for game 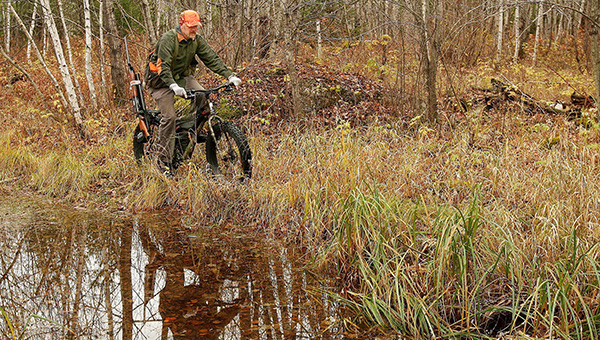 Hansi Johnson pedals a fat-tire mountain bike to a trail he wants to hunt near Duluth on Oct. 22. –Sam Cook/Duluth News Tribune

DULUTH — On an overcast October morning, Hansi Johnson walks down an old logging trail flanked by young aspen. He carries his old Browning 12-gauge A-5, inherited from his grandfather, ready to swing on a ruffed grouse.

It isn’t unusual to find Johnson, an avid grouse and duck hunter, deep in the woods this time of year. But he didn’t get here in the usual way.

Parked somewhere behind him along the trail is his fat-tire mountain bike built specifically for hunters. It’s a Cogburn CB4, a beefy bicycle with tires nearly 4 inches wide. It’s fitted with a sturdy scabbard that holds a shotgun, a rifle or a bow. What it doesn’t come with is a motor.

“I love the fact that the gun is off my back and on my bike,” said Johnson, who is Midwest region director for the International Mountain Bicycling Association. “It’s a total feeling of freedom, especially if you’ve done it with the gun on your back for a long time.”

Johnson has been riding trails to ruffed grouse for as long as mountain bikes have been around. He first rode a standard mountain bike with tires about 2 inches wide. Good, not great, for hunting.

“When I first tried a fat-tire bike,” he said, “that was definitely a lot easier.”

Fat-tire bikes are the latest craze among mountain bikers. They’ve emerged in the past few years, designed originally for riding on packed snow. They feature tires nearly 4 inches wide, and a new breed this year will offer tires nearly 5 inches wide. They’re ridden with very low tire pressure, as little as 7 to 8 pounds, for increased traction and stability on beaches, snow and ice.

For the past few years, Johnson had ridden his Salsa Mukluk fat-tire bike for hunting, using a sling to carry his uncased shotgun across his back. That bike is a lot more practical for hunting than the early breed of mountain bikes.

“It’s a more stable platform, and running the tires with lower pressure, you can ride slower,” Johnson said.

But he still had to strap his shotgun to his back.

“For short hunts, it’s not too bad,” Johnson said. “If you’re out all day, your back is pretty raw. The center of your back is always going to hurt.”

With the shotgun in the rack of the Cogburn CB4, all of that pain goes away.

The inspiration for the bicycle came from hunter and bicyclist Bobby Dahlberg and others at Cogburn Outdoors, which is owned by Quality Bicycle Products in Bloomington, Minn.

“We were already hunting on our bikes and recognized it as being a great tool for that,” Dahlberg said. “When the fat (fat-tire) platform came out, we thought it was just perfect.”

He uses his CB4 for checking his trail cameras and scouting for deer hunting as well as small-game hunting. The bike is proving popular with foragers who travel into the woods looking for mushrooms, he said.

Johnson uses the CB4 he purchased mainly to get to areas that he wants to hunt. They ride a good distance down a logging trail, slip into waders and carry our bikes across a stream. On the other side, they continue riding until Johnson comes to the trail he’s looking for.

If you talk to people who own fat-tire bikes, they invariably gush about how fun it is to ride them. They’ll go almost anywhere your legs can power them, and because the tire pressure is so low, the ride is fairly smooth even on a rough or rocky trail. They’re geared low so the rider can maintain momentum even at low speeds.

And it’s legal, in Minnesota, to carry an uncased and loaded shotgun on a mountain bike, according to Department of Natural Resources conservation officers.

After flushing a grouse and a couple of woodcock that present no shooting opportunities, another grouse flushes from Johnson’s side of the trail. He swings the old Browning but can’t catch up with the bird.

“I was expecting it to go left, but it went right,” he said.

Another flushes on Johnson’s side, and it somehow dodges three rounds from the 12-gauge. This disappoints Johnson, primarily because he puts grouse, lobster and walleye in the same category as table fare. But there’s more to the hunt than birds in the pot, he said.

“To be successful in my book does not equal numbers,” he writes on his blog, “Universal Klister.” “It equals adventure and it equals seeing things I have personally never seen before and being where other people are not or at the very least hard-pressed to get to.”

As practical as the CB4 is, a drawback is how long it takes to stop, prop up the bike and remove the gun from its rack, Johnson said. A grouse spotted on the trail can disappear into the woods in that time.

As far as the fair chase issue is concerned, Johnson is comfortable with the fat-bike method.

“At the end, it’s still your legs that make it work,” he said.