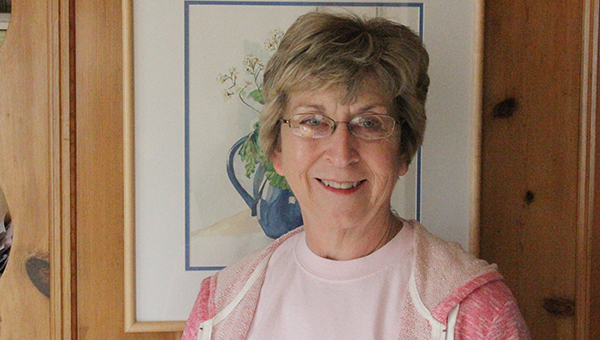 Lilah Aas has been volunteering for the hospice program in Albert Lea for 10 years. –Kelli Lageson/Albert Lea Tribune

That’s how volunteer Lilah Aas describes her work with the hospice program in Albert Lea. She is in her 10th year of volunteering and said she has enjoyed working with families in all the various ways she can help.

“Hospice is definitely one of my passions,” Aas said. “It’s something I love doing.”

Though the hospice program has been in Albert Lea since 1985, Aas said she had never heard of it when an oncologist recommended the program for her and her husband, Gordon.

“Neither of us knew anything about it,” Aas said.

Both assumed it was a physical place where Gordon could go to get help when he was suffering from cancer. They were pleasantly surprised to find out that the program sends volunteers to people’s homes to help with almost anything.

“It was the biggest relief of my life,” Aas said.

Whenever Aas needed anything, a volunteer was a phone call away. Gordon died in 2001, and less than two years later Aas was hoping to become a volunteer for the hospice program to help others.

Aas said people often ask her if it’s depressing to be a hospice volunteer. And while most of the patients on hospice care have six months or less to live, Aas said it’s often not depressing at all.

“We’re all going to die,” Aas said. “We know where the road is going; hospice tries to make that journey more comfortable.”

Every person is different, and Aas said the hospice care focuses on what each person prefers. Some people enjoy having hospice volunteers in their home for visits, and others don’t call for help at all.

“It’s different for every person or family,” Aas said. “One woman wanted to be read to and some patients are in a nursing home but still get hospice care.”

Aas said many people enjoy having music played or they enjoy singing along to songs. One patient who normally wasn’t coherent often was able to sing along every word when Aas asked her to sing a song.

Aas considers it an honor to be allowed into someone’s life during one of the most private times. It can be hard getting attached to patients, but Aas said that’s part of what makes the volunteer work worth it.

“You get as a volunteer way more than you give,” Aas said.

Aas is a volunteer with a bereavement group the hospice holds for spouses whose husband or wife died while in hospice care. Many connect with Aas because they know she has been through the same thing.

Home Health & Hospice will hold its Set Memories Aglow fundraiser early in December. Donations help provide the group with items it needs. Care is never refused if someone cannot pay, because the program is funded by Medicare, Aas said.

Monetary donations toward a light on the special hospice tree in memory of a loved one, friend or for someone living you wish to honor are still being accepted. Donation forms are available at the Mayo Clinic Store, located on the first floor of the medical center, in the hospice office, 1705 S.E. Broadway, or at one of the following locations:

All donations help support the Albert Lea hospice program. The funds will be used for the following items which include, but are not limited to, patient care items, family bereavement services and free public groups. For more information, call 507-377-6393.