‘Hyperbole and a Half’ does alot for humor

One morning during a family gathering at Fillenwarth Beach Resort on the shore of West Lake Okoboji in Iowa back in 2011, I had some time to kill, so I perused my cellphone for something to read.

Normally, I consume news on my phone. But I was on a vacation and was bored of news — yes, it happens — and dug around for something else to read. Blogging was still a big deal back then, and I came across a hilarious blog called “Hyperbole and a Half.”

There are probably people who have seen her funny, crude illustrations and not known what the source is. The most famous one is her holding a broom under the words, “Clean all the things!” 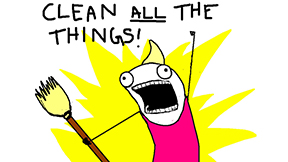 It comes from a blog post about the struggle to do what she wants to do, mainly browse the Internet, versus what adults are supposed to do — clean the house, among other responsibilities.

Last week on Tuesday night following a meeting of the Albert Lea City Council, I drove on Fountain Street in my chilly pickup from Albert Lea City Hall to home. I clicked on the radio to Minnesota Public Radio, and Terry Gross, the host of “Fresh Air,” was interviewing someone who described a comedic blog. Suddenly, Gross explains who it is: Allie Brosh, author of “Hyperbole and a Half.” She has a new book out by the same name. And then Gross says they would return after a break.

Wait! A break! But I am in the truck now, not after the break.

It was as though I needed Brosh to draw this situation in her stick-figure style.

Oh well. It was a short drive anyway. I listened to it later.

Gross says: “Allie Brosh’s humorous, autobiographical blog, ‘Hyperbole and a Half,’ has a huge following. In 2011, an editor of PC World included it in a list of the ‘10 funniest sites on the Internet,’ and this year, Advertising Age included Brosh in its annual list of the year’s most influential and creative thinkers and doers.”

The interview reveals Brosh resides in Bend, Ore., and actually can draw but makes her illustrations crude on purpose, to be funny. Brosh tells of her battle with depression, too.

Let me share with you one of the blog entries from “Hyperbole and a Half” that, as an editor, I enjoy, albeit without most of her pictures:

The Alot is better than you at everything

As a grammatically conscientious person who frequents Internet forums and YouTube, I have found it necessary to develop a few coping mechanisms. When someone types out “u” instead of “you,” instead of getting mad, I imagine them having only one finger on each hand and then their actions seem reasonable. If I only had one finger on each hand, I’d leave out unnecessary letters too!

(Picture of a guy with one finger on each hand.)

If I come across a person who seems to completely ignore the existence of apostrophes and capital letters and types things like “im an eagle and im typing with my talons, so dont make fun of me cuz this is hard,” I like to imagine that they actually are an eagle typing with their talons. It would be a hassle if you had to hop in the air and use your feet to karate-chop two keys simultaneously every time you wanted to use the shift key to make a capital letter. Also, eagles lack manual dexterity, so I can understand why they’d want to leave out apostrophes. Eagles are all about efficiency.

(Picture of a standing eagle typing on a laptop computer in a tree.)

But there is one grammatical mistake that I particularly enjoy encountering. It has become almost fun for me to come across people who take the phrase “a lot” and condense it down into one word, because when someone says “alot,” this is what I imagine:

The Alot is an imaginary creature that I made up to help me deal with my compulsive need to correct other people’s grammar. It kind of looks like a cross between a bear, a yak and a pug, and it has provided hours of entertainment for me in a situation where I’d normally be left feeling angry and disillusioned with the world. 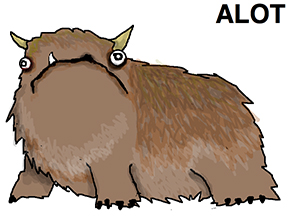 For example, when I read the sentence “I care about this alot,” this is what I imagine:

(Picture of a person hugging an alot.)

Similarly, when someone says “alot of _______”, I picture an Alot made out of whatever they are talking about.

(Many pictures, such as “alot of straw” is an alot made of straw.)

If someone says something like “I feel lonely alot” or “I’m angry alot,” I’m going to imagine them standing there with an emo haircut, sharing their feelings with an Alot.

(Picture where one person says “I’m sad, alot …” and the Alot says “Alot no understand why sharing feelings with. Alot just want to be left alone.”

The Alot is incredibly versatile.

(Several pictures, such as “I like this alot more” with a guy favoring one alot over another.)

So the next time you are reading along and you see some guy ranting about how he is “alot better at swimming than Michael Phelps,” instead of getting angry, you can be like “You’re right! Alots are known for their superior swimming capabilities.”

(Picture of an alot swimming with Phelps.)

Tim here again: Check it out, and, my dear Lisa, her book would be a great Christmas gift.