Jimmie Walker is coming to A.L.

Actor and stand-up comedian Jimmie Walker, known for playing J.J. Evans on the hit sitcom “Good Times,” is planning a show on Thursday at the Land Between the Lakes Event Center. 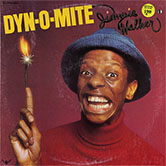 The family-friendly show is slated to begin at 7:30 p.m. in the event center at America’s Best Value Inn. Tickets are $25 and can be purchased at the front desk of the hotel.

She said she is excited Walker is coming to town.

“We’re trying to bring events to Albert Lea so you don’t have to drive up to the Cities,” Olvera said.

Walker was the first winner of the NAACP Image Award and won a Golden Globe nomination for Best Supporting Actor in a Comedy Series.

He appeared on “The Mac Davis Show,” “Donny and Marie,” “The John Davidson Show,” “The Merv Griffin Show,” “The Mike Douglas Show,” “The Hollywood Squares” and “The Match Game,” according to a news release.

Over the years he has appeared as the headliner at comedy clubs and been a part of joke writing teams for David Letterman, Jay Leno and Byron Allen.

He was a regular on television shows such as “The Love Boat” and “Fantasy Island” and in recent years appeared on “The George Lopez Show,” “Everybody Hates Chris” and “Scrubs.”

Walker tours the country for 35 weeks of the year doing stand-up comedy, performing live and appearing as guests on game shows and late night television, the release stated. In his spare time, he writes scripts for TV and movies.