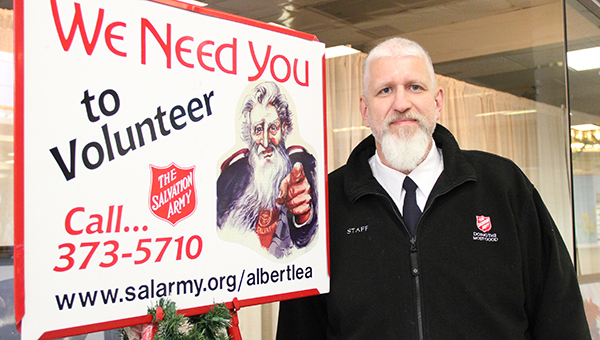 The captain of the Albert Lea Salvation Army announced this week he plans to attempt to break a world record by bell ringing consecutively for more than 80 hours.

The contest, which Capt. Jim Brickson has dubbed Stand Up for Freeborn County, is slated to begin at 11 a.m. Dec. 3 in the center court of Northbridge Mall. Brickson said it is a chance to celebrate the organization’s volunteers and to encourage local donations during the Salvation Army’s annual red kettle campaign.

“I’m looking forward to making the 80 hours a good 80 hours,” Brickson said. “Are my feet and my legs going to hurt? Yes, but it’s all going to be about perspective.”

During the contest, Brickson will not be allowed to sit, eat or drink, outside of small breaks of five minutes for each 60 minutes of ringing. The breaks can be accumulated.

Though the mall normally closes at night, the door to the center court will be open for people to come throughout the evening and early morning hours.

The entire attempt will be streamed live at SalvationArmyNorth.org/albertlea. Brickson will send tweets from @ahrten. The national hashtag for the event is #Ringiton.

“I’m a little apprehensive and excited,” Brickson said. “There’s a lot of stuff to get done before this.”

He asked for people to encourage him along the journey and invited local church, community or school groups to come out and sing or provide other entertainment near the kettle. There may be daily morning worship services to boost his spirits.

The organization is also looking for corporate sponsors and matching dollars.

The announcement comes as the organization began its kettle campaign Friday.

Brickson said he hopes his efforts encourage others to sign up to bell ring throughout the remainder of the holiday season. As of Monday, there were more than 1,000 hours available for bell ringers through Christmas Eve. Bell-ringing stations are at Hy-Vee, Northbridge Mall, Shopko, Walmart, Walgreens and Nelson’s Market Place.

Along with putting money into Brickson’s kettle during the ringing marathon, supporters can give online at onlineredkettle.org/freeborn.

People can also donate to the campaign by texting NORTH to 80888. With each text, a $10 donation will go to the Albert Lea Salvation Army.

People interested in making a match challenge or who are interested in coming to entertain or volunteer at the kettle with Brickson are asked to call 373-5710.