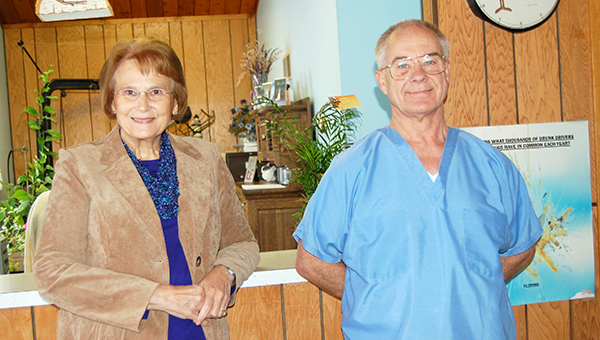 Janet and Steven Poeschl have retired after 41 years of serving the Alden community with his dental practice. –Shelly Zeller/Alden Advance

Forty-one years and hundreds of patients later, Dr. Steven Poeschl has retired from his love of serving the Alden community.

Poeschl and his wife, Janet, moved to Alden June 30, 1972. On Sept. 19 of that year, Herma Milhouse was the first patient to occupy his dental chair.

“Alden was my first place out of dental school,” Poeschl said. “I was 23 years old when I moved here.”

Poeschl saw his last patients on Nov. 8. He said it’s not easy stepping down from a business after more than four decades.

Poeschl said he never really intended to retire, something he just never thought about.

“But about a year and a half ago the realization with my health told me it was about time,” he said.

Fifteen years ago Poeschl had surgery on his hand and 10 years ago was diagnosed with rheumatoid arthritis. Seven years ago in July, he had his knees replaced.

“I feel bad to be leaving practice, but with my physical issues, it’s not reasonable,” he said.

For more than four years, the Poeschls worked to get another dentist to come and take over the practice or set up a satellite office. There was no interest.

Poeschl said listing it with a broker wasn’t an option for him either.

“I didn’t want someone from a larger place like the Cities to drive down to the office and back to their house and not make Alden their home,” he said. “That’s not fair to the town or the patients.”

“Dr. George Lundstrom, who has a practice in Albert Lea, agreed to see my patients since he has the patient capacity. I have been using him a long time for crown and bridge work, so some of my patients are already familiar with him and that helps.”

When Poeschl started his practice, there was no insurance intrusion in the marketplace.

“Now you have to do what the government says or you are out of business,” he said. “Another big change is the huge amount of student debt. I had $5,000 in student loans when I graduated and now its close to 100 times that amount.”

He said in his day people would become dentists to serve others, not get rich. He said he was able to send his four children to college and had enough to finish debt-free.

When choosing where to live and work 41 years ago, Poeschl said he knew Alden would be a great place to serve.

What’s next for Poeschl, who has been in school and working since age 4?

“Well, now I have time to sit on my couch, complain about the government and watch the Weather Channel,” he said. “I said I would retire before the first snowfall, and I timed that perfectly.”