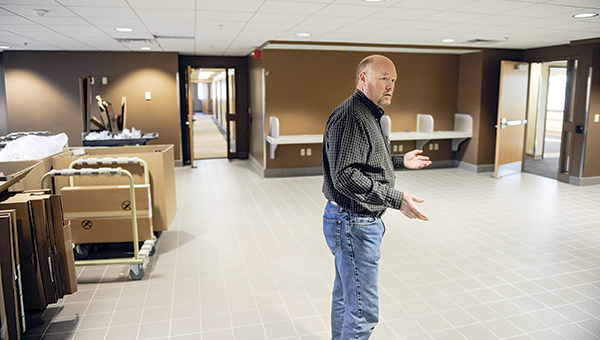 Mower County coordinator Craig Oscarson stands in the new lobby to the upstairs remodel of the Government Center during a tour of the area. –Eric Johnson/Albert Lea Tribune

AUSTIN — When the two leaders of Mower County Health and Human Services stood in the second floor lobby of the Mower County Government Center last week, they were quick to point out one of their favorite parts of their new offices: windows.

“When you’re looking at windows like this, it’s hard to beat because there’s no windows where we’re at,“ Community Health Director Lisa Kocer said. “The staff is ecstatic.”

After nine years at Oak Park Mall, the county is moving health and human services this weekend into what was once the jail and courtrooms. The project is considered the second and final phase of the county’s building project that previously built the jail and justice center. Prior estimates had remodel costs at about $4.3 million — about $1.3 million for the joint Law Enforcement Center remodel and about $3 million for the county’s Health and Human Services remodel. However, County Coordinator Craig Oscarson said the project is coming in under budget.

Health and Human Services closed at 1 p.m. Friday at Oak Park Mall to move over the weekend and will reopen at 1 p.m. Monday at the Government Center.

As Kocer and Human Services Director Stevermer ready for their first day in their newly renovated home, a little natural light is just the tip of the iceberg.

“We absolutely love it,” Stevermer said.

The public will access health and human services with the same stairs that used to lead to the old courthouse. People can then go down a ramp to the left to the Human Services window or up a ramp to the right to access the health offices.

Stevermer is pleased with the warm, inviting look of the offices, and she hopes that will have a positive effect on employees.

Stevermer, county officials and the board were able to plan and maximize space. Along with adding natural light, Stevermer said they took into account things like sound with ceiling panels, paint colors and other things to enhance work productivity.

With the offices downtown, staff will be closer to the Jail and Justice Center, human resources and the county’s financial employees — key departments Stevermer and her employees work with.

Plus, employees won’t have to drive across town for court appearances or meetings.

“Everything can occur in this location,” Stevemer said. “It’s more of an efficient use of time.”

Plus, the new site will be more secure. Only a portion of the new offices will be open to the public, with the majority of office space only accessible by key cards.

In other spots, the public will need to be buzzed into some offices.

From old to new

More than 60 health and human services workers will be moving and about 20 will remain as telecommuters. Additional employees could start telecommuting in 2014, according to Stevermer. Telecommuting has worked well in Mower County, and Stevermer described the employees as ones who have high productivity.

All the remnants of the old jail have been removed — though Oscarson admitted it was no easy process — and most of the metal was scrapped and sold. Much of the old jail space is now a large room of more than 50 new cubicles where the bulk of the department’s employees will work. The county bought new cubicles, most of which are 8-feet-by-8 feet to better fit in the limited space of the old jail. The old cubicles were from the 1980s and were too large to fit enough workspaces, plus the county had to work around several support beams.

A great deal of the furniture is being reused, and some new items have also been donated. The benches from the old courtrooms will now be used in the waiting area in the lobby, and Mayo Clinic Health System donated chairs and exam tables.

Some old courtroom space was converted into nine interview and intake rooms and a larger family conference room, which are the rooms where Human Services employees will meet with clients — something that used to be done in employees’ offices.

“This is a more secure thing for our clients as well as our employees,” Oscarson said.

The new administrative offices used to be the judge offices. Some back hallways with in the Human Services portion were left relatively untouched, except for cosmetic updates.

The workspace will be better suited to meet the needs on the health side of things. Three exam rooms will hold shot clinics, open door clinic, the Women, Infants and Children, or WIC, programming, blood pressure clinics and more.

“We wanted to make it some it would function for all,” Kocer said.

Kocer and Stervermer were also thrilled to have a special lactation room for breastfeeding mothers, and Kocer described it as practicing what they preach, especially with WIC.

Customers can come in for a shot or clinic business and then exit through a backdoor leading back to the lobby, which Kocer expects will improve workflow.

There’s also a room where all vaccinations and medicines will be locked, with an adjoining storage room for medications that require refrigeration.

They also now have a height and weight room, which was previously checked in the health lobby before.

In the LEC, most of the work was cosmetic, though he LEC also expanded within the building. The former corrections offices are now deputies’ offices, and another set of rooms was converted into conference room and training space for all county employees.

In part of the basement, the LEC’s locker rooms are currently being updated to have more space, and the locker rooms will have larger lockers for all the police equipment. The LEC’s fitness room will also be larger.

The dispatch room and three dispatch consoles have already been revamped and employees have been there a few months. The dispatch room can stand alone, meaning the dispatchers have their own space with a fridge and bathroom, so they’re always near their consoles. The room also has all its own heating and cooling controls since it’s staffed 24 hours a day. Work stations are ergonomic and can be adjusted for each employees’ height.

Though county officials are excited with the move, they had positive things to say about their time at Oak Park Mall. Kocer praised the mall’s leadership for working with them and giving them meeting space when they needed it.

“The mall served its purpose and was a good site,” Kocer said.

To Stevermer, there should be little effect on Oak Park Mall’s business, and she anticipates employees’ shopping routine won’t chance since most employee buy groceries or shop after work.

Hours of operation, clinic hours, emails and phone numbers will all stay the same. Stevermer said parking may be the biggest change for customers, as it will be mostly street parking.

While perhaps the most extensive work was completed on the second flood, areas on the main floor are also part of the remodel, though much of the work was more cosmetic.

Many old offices have been repurposed. Oscaron’s office, along with human resources, finance and payroll employees will all move into a new set of offices along the building’s south wall that used to be near the old county attorney’s offices.

Employees will move into those offices in a few weeks.

After the current remodel is completed, the county will update some other space. Oscarson’s current office will get new carpet and paint before veteran services and emergency management move to the space. Then, similar updates will be done in the veteran services’ current location and the old auditor’s area for the new location of Mower County Extension, which is currently in the basement.

Many of those moves will likely happen over the winter and spring, according to Oscarson.