No chickens in Northwood? 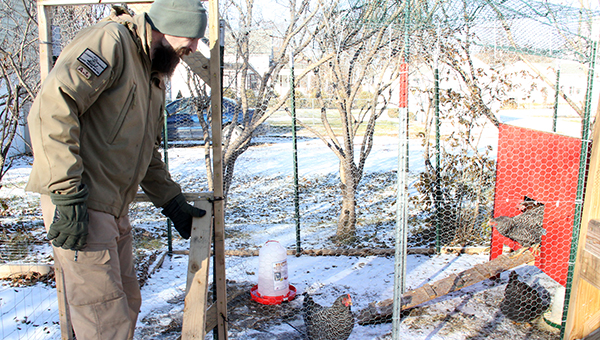 Leo Hendrick of Northwood opens the door to the chicken coop Friday behind his house. Hendrick is fighting a citation that says he is unlawfully keeping the animals.
–Sarah Stultz/Albert Lea Tribune

NORTHWOOD — A Northwood man is fighting back after the city in September ticketed him for raising chickens in a pen in his backyard.

Leo Hendrick and his wife, Jerilea, and their two young children having been raising the chickens behind their home at 602 First Ave. N. since this summer to support their organic way of living.

“We’re trying to protect our health,” Hendrick said. “That’s what it boils down to.”

The family moved to Northwood almost six years ago and has since been trying to wean off processed foods and, in many instances, unnecessary chemicals and hormones. 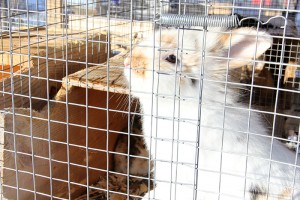 In addition to chickens, the Hendricks raise rabbits, some for show and some for meat, in their backyard.

He said he hunts for his own food, and the family eats meats such as venison, chicken, rabbit and goat, but not beef. They have multiple gardens where they grow vegetables and later preserve them to eat the rest of the year, and they hope to raise chickens for their own eggs.

“What we don’t produce ourselves, we get at farmers markets,” he said.

Shortly after the Worth County Fair this year, a relative of a neighbor gave the family their first three chickens. He said they purchased another 13 from Hoover’s Hatchery in Rudd, Iowa. 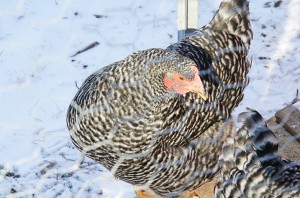 A chicken can be seen last week in the backyard of Northwood resident Leo Hendrick.

At the end of August, a Worth County sheriff’s deputy stopped by the house with a letter stating he would have 10 days to remove the animals from the property. He later found out that a city official brought the matter to law enforcement.

Hendrick said after he received the letter he requested to be on the Northwood City Council agenda to talk about his options and even submitted a possible amended ordinance for keeping chickens within the city limits.

He got a list of about a dozen of his neighbors who voiced their support and researched what other communities in Iowa allow.

“It was met with just blank stares,” he said. “One of the council members told me I basically needed to just fit in.”

They denied his request.

On Sept. 30, the Worth County Sheriff’s Office mailed a citation to Hendrick, stating he was keeping livestock unlawfully in the city.

According to Northwood City Code Section 55.05, “It is unlawful for a person to keep livestock within the city except by written consent of the council or except in compliance with the city’s zoning regulations.”

He pleaded not guilty to the charge Oct. 10.

Hendrick’s case is slated for trial before a magistrate judge at 9 a.m. Dec. 13.

Though Hendrick was initially representing himself in the case, last week he requested a court-appointed lawyer. The court selected Michael Moeller of Clear Lake. 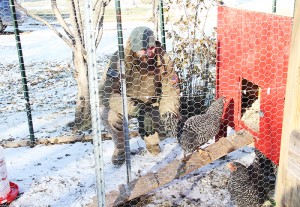 Leo Hendrick crouches in the chicken coop he constructed in his backyard earlier this year.

The city is being represented by lawyer John Greve.

Magistrate Judge Douglas Krull ruled that Hendrick cannot talk about other cities in Iowa or elsewhere that allow people to keep chickens, along with the benefits of homegrown food or whether people actually agree with the law.

Last week, Krull stepped down from the case because he was an acquaintance with one of the city’s witnesses.

Earlier disagreements with the council

This is not the first time Hendrick has disagreed with city leaders.

Hendrick said he started attending the Northwood City Council meetings a little more than a year ago and has voiced his opinions on several issues.

When the council considered banning guns on city-owned property in July, Hendrick, an Army veteran and owner of the Spartan Arms gun shop, stepped up in opposition. The council ultimately voted 3-2 to withdraw the proposal.

This summer he asked the city to stop spraying for mosquitoes in front of his house because he didn’t want the chemicals near his gardens.

“I believe in freedom,” he said. “I’m not afraid to show what I’m thinking about, what I believe in.”

He said he doesn’t know whether his outspoken personality has caused problems for him, but he knows people in the community have shown their support. Some have even told him about their own chickens they have been hiding in their garages because they are too afraid to keep them elsewhere.

“This has turned into more than just whether we can have chickens in town,” Hendrick said. “It comes down to the fact that the council is not listening to its citizens. They listen to some, but that’s just the ones they agree with.”

Mayor Jane Bloomingdale did not return a call to the Tribune.

Albert Lea City Code states residents can keep up to 25 chickens, but no crowing roosters are permitted. The animals must be kept at least 50 feet away from the nearest residence on a neighboring property.

When a poultry house is 100 feet away from the nearest residence, a person can keep up to 50 chickens.