Update: No one hurt in morning fire; cars damaged 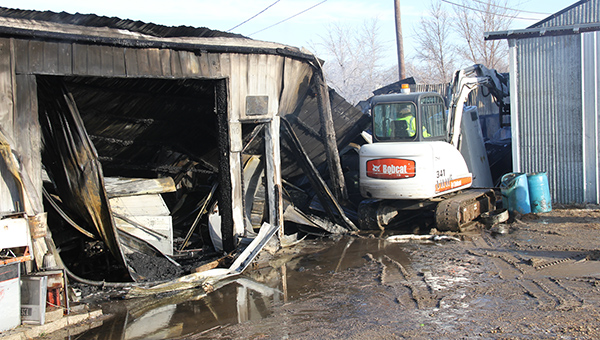 A firefighter operates a skidloader Monday morning to knock down walls at a shed behind Subway on East Main Street near the Union Pacific Railroad tracks.

No one was hurt in an early Monday morning fire at a storage shed behind Subway on East Main Street.

However, three classic automobiles were destroyed, said Jeff Quam of Albert Lea. He and his son, Wade, own the 0.26-acre property.

He said he had owned the Chevy for 21 years. The other two cars belonged to other people and were being stored for the winter. He said the gasoline and oil in the cars gave fuel to the fire, adding he had no idea what started the blaze.

The cause of the fire remains under investigation, said Albert Lea Fire Department Capt. Scott Hanna. The department and the state fire marshal are investigating. 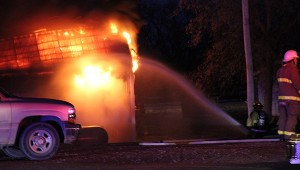 Firefighters begin dousing the flames with a hose Monday morning. The nearest hydrants were by Walgreens across the street. — Tim Engstrom/Albert Lea Tribune

The fire, at 716 E. Main St., was called in by a passer-by at 6:20 a.m. Hanna described the structure as a wooden shed covered by sheet metal. Unlike a pole barn, the shed had wooden walls and roof, as if it had been a wooden building initially and later covered in metal. Firefighters had control of the fire around mid-morning, he said, and cleared the scene at noon. They returned within the hour to douse a hot spot.

Hanna said he expects the department to return often to the site, because the metal prevented water from penetrating wood, which likely is to continue to smolder “for hours, if not days.” 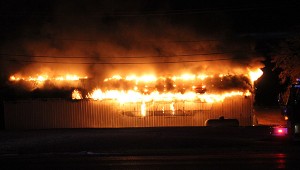 Firefighters Monday morning used a skidloader with a front excavator to knock down walls and seek out hot spots.

Firefighters heard explosions, Hanna said. In an auto garage, they could have been tires, shocks, gas tanks or oxy-acetylene tanks.

“Any number of things could give off loud bangs in a fire,” he said.

Police blocked off East Main Street from Garfield Avenue to Newton Avenue. Many morning commuters could spot the blaze from Bridge Avenue. Some took side streets to get around the blockade, returned to Main or the gravel alley south of Main, then discovered they were about to run over fire hoses, which is against state law. Most drivers figured out they needed to take Bridge Avenue.

Firefighters successfully protected a smaller, second building about five feet from the burning building on the southeast side, Hanna said.

A propane tank, the kind typically found on farms, was near the building’s northwest side. Hanna said they had the supply shut off. It still had propane in it, and if hot enough could explode, but he said the firefighters kept it cool with water. There were gas pumps on the southwest corner of the building, but they were not connected to tanks. Hanna said they were collector items.

Hanna said though no one was harmed losing valued property is a struggle for anyone following a fire.

Another small structure had some exterior heat damage, and another was untouched.