NRHEG RB is Player of the Year 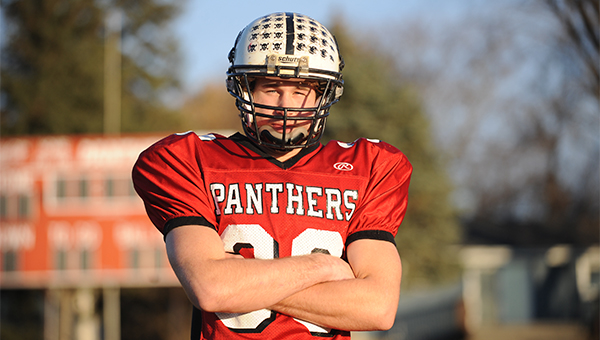 Dillon Partpart of New Richland-Hartland-Ellendale-Geneva is the Tribune’s Player of the Year for football. He rushed for 1,495 yards and 15 touchdowns this season. — Micah Bader/Albert Lea Tribune

On both sides of the ball, Dillon Parpart made a positive impact on the football field.

The senior middle linebacker and running back from New Richland-Hartland-Ellendale-Geneva led the Tribune’s seven-team coverage area with 1,495 rushing yards, while also compiling 99 tackles and a sack.

“Everyone talks about him as a running back this year, close to 1,500 yards — and that’s outstanding — but to me, I’ll always remember Dillon as our middle linebacker,” said NRHEG head coach Dan Stork after his 11th season. “He’s probably one of the best linebackers I’ve ever coached.”

Parpart is second on the Panthers’ career tackles list, eight tackles behind David Lindell, who is a captain of the football team at the University of Wisconsin-Stout in Menomonie, Wis.

Parpart is a three-year starter who played varsity since his freshman year, but that’s not where his connection to NRHEG football began.

“I was a manager when I was in fourth grade,” Parpart said.

His first action as a varsity player was as a freshman during the section playoffs when he filled in for an injured player, and the Panthers didn’t miss a beat.

“We knew right then that we had something special here, and this was going to be fun,” Stork said.

Parpart’s inspiration to play the game comes from former Panthers, including Dakota Tracy, who played quarterback for the University of St. Thomas, and Taylor Holland, a current assistant coach for the NRHEG football team.

“I always wanted to be like those guys when I was younger,” Parpart said. “That’s been a big motivation for me.”

Parpart’s rushing total was 679 yards more than the second-leading running back in the area, and he put up those numbers without playing in the backfield during the season opener against Blooming Prairie. He began the year as a tight end, because he was the Panther’s No. 1 receiving threat and a key blocker, Stork said.

“We knew we could put him in the backfield, but we didn’t know how to replace him up front,” he said.

“They stepped up, and that allowed us to move Dillon,” Stork said.

The other linemen who paved the way for Parpart and the rest of NRHEG’s backfied were Noah Krell at right tackle, Nic Goette at right guard, Jon Weller at center, Keith Maxon at left guard and Zeke Erickson at left tackle.

“We had some great size up there. Those guys weren’t going to out-run anybody, but if they got a helmet on you, they were going to move you,” Stork said.

The offense had chemistry as a unit, Parpart said.

“I wouldn’t have rather run behind any other offensive line,” he said. “I have such a good bond with them. The effort they gave in the offseason and throughout a game was 110 percent the whole time. They never took any plays off.”

Stork credited assistant coach John Schultz for coaching the linemen and getting them to play hard. The adage of three yards and a cloud of dust could represent the NRHEG offense, except it was closer to five yards per rush, which moved the chains and racked up five wins in the Panthers’ last seven regular season games.

The highlight of the season came in Week 2 against Waterville-Elysian-Morristown 21-12, Parpart said. He also participates in baseball and wrestling and works with construction during the summer.

“He’s the epitome of hard work,” he said. “It goes to show what hard work does, and we’ll be telling our kids that for years. ‘Remember that Parpart kid? How hard he worked? Look what he did. That could be you.’”