Signing on the dotted line 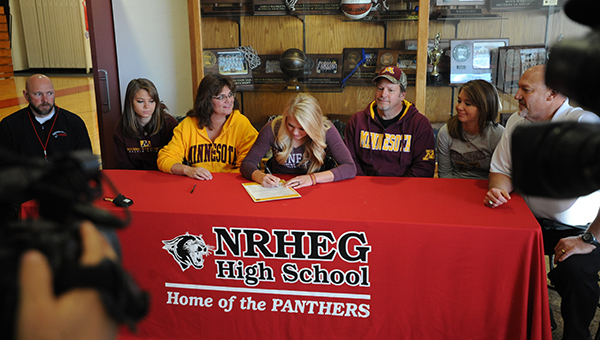 NEW RICHLAND — Carlie Wagner is going to be a Minnesota Gopher. 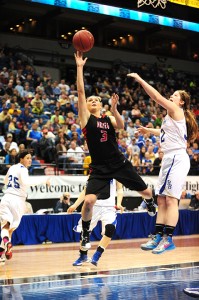 “I’m a southern Minnesota girl who’s used to the country and everything, but I think I’ll adjust well there,” she said. “I have friends there and family in the Cities, so I’ll be OK.”

The big stage hasn’t frightened Carlie. In fact, she’s thrived under the bright lights. In the Class AA title game against Braham last year, she scored 50 points and grabbed 12 rebounds in a 60-59 win. She also set five state records and tied one. Until Carlie came along, four of those state records endured from the early 80s.

A good relationship with the coaching staff at Minnesota helped put Carlie’s mother, Jane, at ease with the decision.

“We love the coaches. Our rapport with the coaches is really good,” Jane said. “I’m really comfortable with them, and they’re really good people.”

Borton not only developed a relationship with Carlie and her family, she also spoke with NRHEG head coach John Schultz on multiple occasions.

“She (Borton) has been at our first day of practice for the last two years,” Schultz said. “She’s been to tons of our games, and we’ve talked a lot. She did a nice job of recruiting.”

The university’s location also aided Borton. Although Carlie had numerous offers, she only visited two schools: Minnesota and Iowa State.

The university provided tickets for Jane and her husband, Darren to watch Carlie’s games, Jane said. The family plans to use them to cheer on Carlie in addition to going to Maddie and Marnie’s games at NRHEG. Maddie and Marnie are Carlie’s sisters, and they also have a flair for basketball.

The majority of the current Gophers roster hail from their home state: One player is from Dallas, Texas, one is from Stockholm, Sweden, another is from Gloucester, Ontario and the other seven players are from Minnesota. Carlie said she hasn’t played against any players on the roster in high school, but she was able to meet them.

“I’ve hung out with them and played bean bags with them,” she said. “You get to see the fun side of them, which is something people usually don’t get to see. They see them in uniform on the court, but they’re funny, cool girls.”

Carlie said the choice was hers, despite recruiters and other influences pulling her in different directions.

“Everyone here are Gopher fans, and I was always a Gopher fan,” Carlie said. “So, it was the community and myself that pushed that way.”

The NRHEG girls’ basketball team starts the season against Mountain Iron-Buhl at the 10th annual Minnesota Tipoff Classic at the Linbergh Center in Hopkins at 3:45 p.m. Dec. 7.