Persevering on the pitch 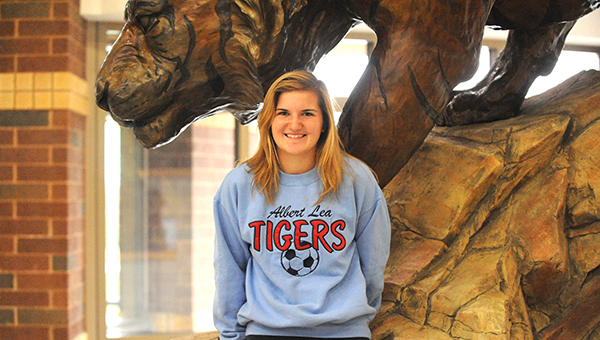 Despite playing with a deteriorated ligament in her knee, Brooke Hanson garnered All-State honorable mention accolades and led the Albert Lea girls’ soccer team deep into the postseason.

Hanson, a senior midfielder, said she’d never had a similar injury, so she wasn’t sure how her knee was holding up.

“Every now and then, my knee would shift,” she said. “I didn’t know if that was the new normal of how it would always be, or if there was something wrong.” 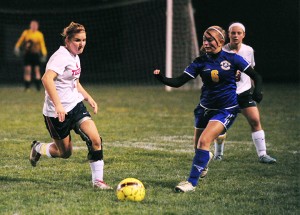 Brooke Hanson of Albert Lea clears the ball to the sideline in the Tigers’ 2-1 win over Mankato Loyola in the Section 2A quarterfinals. Albert Lea advanced to the section finals before falling to Mankato West 1-0 in a shootout. — Micah Bader/Albert Lea Tribune

The injury began the fall of Brooke’s junior year, when she tore the anterior cruciate ligament (ACL) and the medial collateral ligament (MCL) in the same knee during a preseason soccer scrimmage. She watched from the sideline that year and underwent physical therapy from Greg Deyak, she said.

“It took forever,” Brooke said. “Once they tell you you’re close to being able to run, you want to do more and more. Then you get sore muscles again, and it’s like starting all over.”

Brooke’s mother, Jenny Hanson, said Brooke was diligent in her recovery. Jenny and her husband, Darren — who played soccer as a club sport when he attended Albert Lea High School — encouraged Brooke by celebrating milestones of recovery.

With therapy presumably completed, the pitch was set for a breakout season for Brooke, who played varsity soccer since seventh grade and was a team co-captain with Sydney Overgaard.

The Tigers began the season 3-3, and went 7-2-1 in the last 10 games of the regular season, thumping Rochester John Marshall, Rochester Mayo and Rochester Century in the process.

Albert Lea continued into the postseason by making the biggest splash since Brooke’s first year on varsity, when the Tigers qualified for state in 2008. Things were going well. That is, until Brooke visited a surgeon to find out if she could play without a knee brace, Jenny said. The diagnosis caught the Hanson family off-guard.

“Her reconstruction graft totally deteriorated, and where her ACL should have been, there was only scar tissue and fluid,” Jenny said. “We were shocked.”

“She never missed a beat and performed all of her captain responsibilities as well,” he said. “She had a great season, provided leadership and showed such an indomitable will.”

Brooke’s follow-up surgery was Wednesday, and she hopes to continue her soccer career at Wayne State College in Wayne, Neb., next year.

She said she modeled her soccer technique after previous players at Albert Lea High School like Sophie Miller, Morgan Stadheim and Stephanie Ferguson.

“She was able to absorb the great atmosphere that was created in our locker room by those older leaders,” said Albert Lea head coach Rick Barnhill. “She really sponged it in.”

Inspiration on the pitch, Brooke said, also comes from Minnesota Vikings running back Adrian Peterson, who recovered after a similar injury and rushed for more than 2,000 yards in 2012 to be the NFL’s MVP.

“I really like Adrian Peterson, because he’s had ACL problems, but he fought through it and still did some great things,” she said.

With all the work that goes into overcoming the challenge of an injury, Jenny said she is grateful her daughter still has a chance to play the game she loves.

“We’re extremely proud of her perseverance, and we’re excited to continue to cheer her on from the sidelines,” Jenny said.