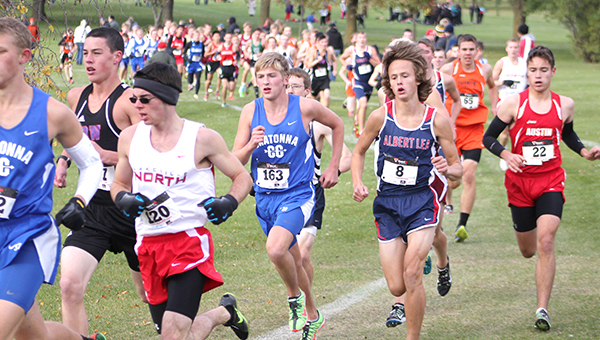 Jackson Goodell of Albert Lea competes in a cross country meet this season. At the Section 1AA meet at Brooktree Golf Course in Owatonna, Goodell qualified for state with a seventh-place finish and a time of 16 minutes, 19 seconds. — Lon Nelson/For the Albert Lea Tribune

Jackson Goodell was new to the sport of cross country a few months ago, and now he’s heading to state.

Goodell will represent Albert Lea at the state meet on Saturday at St. Olaf College in Northfield. Goodell finished seventh at the Section 1AA meet on Oct. 24 with a time of 16:19.80. He was the highest-placing sophomore in the race. Goodell said he didn’t have advancing to state on his mind going into the season.

“I was just looking to do well, and improve,” he said.

Goodell ran in about 13th place at the 1,200-meter mark of the section race, before he made a kick and finished seventh.

“I was pretty excited,” Goodell said. “I was surprised that I made it.”

Goodell played football as a freshman, but decided he’d switch to cross country. Running isn’t a new concept to the soft-spoken sophomore. He ran long-distance for Albert Lea’s track and field team, and he also plays hockey.

I just thought cross country would be good to help me with track, like endurance and stuff,” Goodell said.

Albert Lea head coach Jim Haney said he was happy to have him on the roster.

“Football’s a great sport, but I think he’s found his niche here,” Haney said. “He made huge strides throughout the season and really came on at the end.”

Haney said the toughest part of getting into cross country was developing mental discipline, which is crucial.

“You have to run every day, and its inherently not a fun thing to do,” Haney said. “In football there’s a touchdown. In soccer you score a goal. Here all you do is run, and it’s you against the clock.”

Goodell said there was a slight learning curve in running cross country, even though he ran track.

“With the longer race, you have to pace yourself a little bit more, and know when to kick,” he said. “It wasn’t too hard.”

Haney said Goodell is the most successful boys’ cross country runner since Ethan Marquardt, who went to state during his junior and senior seasons in 2007 and 2008.

Goodell said he was fighting some nerves this week, but said his teammates were still training with him, and running with them helped keep him calm and composed.