Seifert to campaign all across Minnesota in governor race

Former Minnesota House Minority Leader Marty Seifert is taking an 87-county approach to his campaign to be the state’s next governor.

On Monday, Seifert visited Worthington, Jackson, Fairmont, Blue Earth and Austin before finishing with a talk with about 25 Freeborn County Republicans at The Trumble’s Restaurant in Albert Lea. He flew to Duluth that night.

“The state wants to see candidates for governor,” he said. 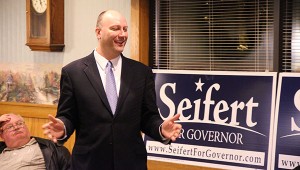 Marty Seifert speaks Monday to Republicans at The Trumble’s Restaurant. He is the first gubernatorial candidate to stop in Albert Lea for the 2014 campaign cycle. –Tim Engstrom/Albert Lea Tribune

Seifert, 41, has spent the last four years as the head of the foundation for the hospital in Marshall, where he resides. This is his second run at the governor’s office. In 2010, he gave up the role of minority leader to seek the office. He won the fundraising battle among Republicans but lost the GOP nomination to Tom Emmer of Delano, who went on to lose in November to Democrat Mark Dayton.

Seifert said the candidates seem to be ignoring Greater Minnesota. He described a visit to Willmar: “It’s the biggest city in 20 counties. They said I was the first candidate to visit.”

Of Worthington, he said it is the biggest city in 10 counties, and he, too, was the first to visit.

Republicans at The Trumble’s on Monday said he was the first to visit Albert Lea.

Seifert said he intends on visiting all 87 counties before the November general election, if he wins the GOP primary. He called Freeborn County “a bellwether county,” and noted that much money has been spent here.

“If you go back and look at how Freeborn County votes, they generally vote for the winner,” he said.

Seifert said he is the only GOP candidate who has proven he can win over moderates, essential for winning the governor’s office.

He is late to the race, he said, because he had pledged not to seek elective office until a campaign to raise more than $4 million for a cancer center was completed. That goal was surpassed in October. 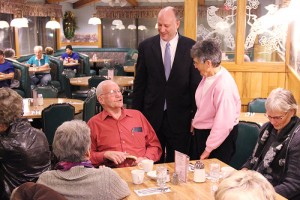 Former state Rep. Paul Overgaard, in red, speak with gubernatorial candidate Marty Seifert, a former House minority leader, on Monday. In pink is Carol Nelson and beside her is the Rev. Nancy Overgaard.

“I’m a man of my word,” he said. “I don’t believe in doing one thing and saying another.”

His theme for the race is “leadership.” He said Dayton has waivered too often. For instance, the governor first wanted to release sex offenders, then he didn’t. He wanted to raise taxes on the wealthy, but then his taxes end up hitting “common people”: farmers, smokers, manufacturers.

“We all know what it is, but it is hard to find in government,” he said.

He said his candidacy has five main points:

1. Reduction of the tax burden. Seifert said he is concerned about people losing their discretionary income in light of increasing taxes and the impact that has on the economy.

2. Identify places to reduce spending. He said he would eliminate three cabinet positions and get rid of the Metropolitan Council. He said the agency has taxation without representation. It can tax, but its board is not elected. He said the role of running metro public transit can fall to the Department of Transportation.

3. Get transportation spending to focus on roads and bridges. He said no one favors a proposal to spend $1.5 billion on a light rail to the southwest suburbs, and he has concerns with how it would impact the Chain of Lakes neighborhoods.

4. Focus on public safety. He said someone who has raped 60 times is not capable of being rehabilitated to live in public again. He said he would restructure sentencing guidelines and make sure sex offenders who are not treatable are not released. He said having an offender in treatment costs the state $135,000 a year, while having an offender in prison costs $35,000.

5. Bolster education. The Roman Catholic noted he is a former teacher and sends his children to a parochial school. He said he is concerned, particularly in the Twin Cities, with the erosion of the length of the school day. It means children are spending less time with teachers. He said he opposes letting school out for a convention of the teachers’ union and said he wants Minnesota schools to avoid Common Core, a federal attempt at across-the-board education standards. He said standards should be set by school boards and parents.

Seifert said Dayton is left of President Barack Obama on the Affordable Care Act, also called Obamacare. And Seifert said he opposes state and federal subsidies for ethanol. He opposes them for Big Oil just the same.

“You should be able to sink or swim,” he said.

DFL Party Chairman Ken Martin released a statement in light of Seifert announcing his campaign: “The 2013 election sent a message to Republicans across the country: Voters want someone they can trust to work with both Democrats and Republicans for solutions to problems. It will be interesting to see if Republican activists got that memo and are open to moderate candidates or if they are still looking for someone to run to the right and against building a better Minnesota.”

Seifert will phase out of his foundation job by December. He has a wife, Tracy, and two daughters, Brittany, 11, and Braxton, 8.