Some stores wait until today to open for Black Friday deals 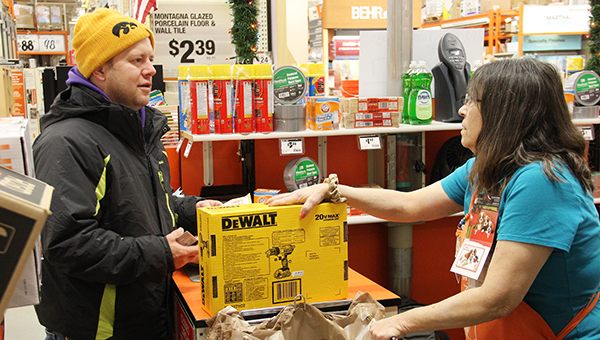 Matt Otten of Mason City checks out this morning with the help of cashier Beth Cole at the Albert Lea Home Depot. The store opened at 5 a.m. instead of opening on Thanksgiving night to give its employees time to spend with their families. –Sarah Stultz/Albert Lea Tribune

No shoppers came to The Home Depot in Albert Lea on Thanksgiving Day. No workers came either.

That’s because the Atlanta-based home improvement retailer opted to keep its 2,200 U.S. locations closed for the holiday.

“We stayed closed so associates can spend that little bit of time with their families, and this let them have a chance to do that,” said store manager Jenny Iverson.

There are 95 people who work at the Albert Lea store and who were able to enjoy the holiday, and about 40 to 50 who are in the store when it is open.

Home Depot joined other national retailers — Nordstrom, Dillard’s, Costco, BJ’s, T.J. Maxx, Marshalls and Ross — in bucking a trend to open stores Thanksgiving Day to offer Black Friday deals fight competition from always-open Internet merchants. It prompts a national debate over the importance of family time on the national day of thanks, particularly for retail workers. 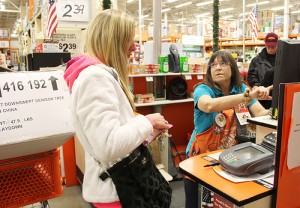 Leah Bearden, left, purchases a Christmas tree that was on sale this morning at Home Depot. Bearden had been out all night shopping.

Walmart in Albert Lea opened at 6 p.m. Thursday. Last year, it opened at 10 p.m. Thanksgiving Day, and Shopko opened at the stroke of midnight. This year, Shopko and Herberger’s opened at 8 p.m.

Leah Bearden and Suzie Delossantos started shopping at Walmart in Albert Lea Thursday night, went to Rochester for more sales and then came back to town where they arrived at Home Depot around opening time.

“It was nice people-wise shopping like this, but it cuts into your Thanksgiving,” Bearden said.

Iverson said she didn’t believe Home Depot would lose out on sales by staying closed Thursday. She said, however, that Black Friday loses some of its luster when stores open on Thanksgiving.

“A big reason for many shoppers is always that early morning anticipation and waiting in line,” she said. “It’s lost with the fact that customers are able to shop on Thursday.

There could be an upside for stores that stay closed. Iverson said some customers could get their shopping at Walmart and Shopko out of the way and go to Home Depot today.

Of course, Home Depot and Walmart cater to different markets. A person seeking a TV set may not be the same type who wants a drill, she said.

Hometown business have a different perspective than national retailers, said Randy Kehr, executive director of the Albert Lea-Freeborn County Chamber of Commerce. They close because their customers are likely with family and want to let their employees have family time, too. It helps keep talented staff and bolsters morale.

He noted that the busiest shopping day of the year actually is the Saturday before Christmas.

In some cases, the small retailer is closed so the owners themselves can be with family.

That’s the case with Linda and Brian Knudsen of Plymouth Shoe Store in downtown Albert Lea.

Linda Knudsen said she works six days a week year-round and wants the time with family.

“Owning a retail store, I don’t get to spend that much time with my family. When there is an opportunity to do it, I prefer to do that,” she said. “Our customers are those loyal, family-based customers who prefer to spend the day with their family.”

The shoe store is open regular hours on Black Friday, 9:30 a.m. to 5:30 p.m. She said they had tried opening earlier and didn’t experience a rush. Her customers, she said, apparently prefer to shop during normal hours.

Iverson, The Home Depot manager, said she personally feels Thanksgiving is getting lost to Christmas but sees why retailers are having to open.

“Customers are shopping so many different ways, online or in a store,” she said. “A lot of that is what has caused retailers to take a different stance and choose to be open on Thanksgiving.”

She said she hopes Thanksgiving avoids being crushed by Christmas shopping.

“We have to stay firm in our belief in family and say this time is sacred.”

People flock to retailers for deals