The son of a jeweler started own business 26 years ago 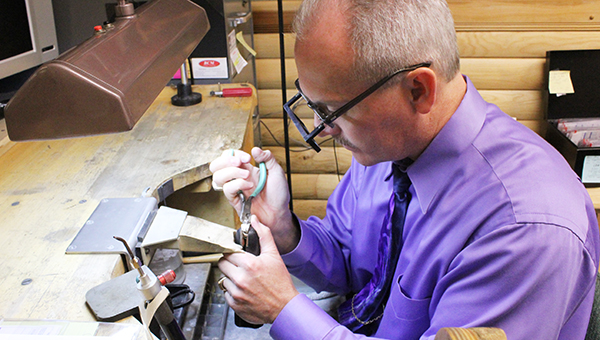 Albert Lean Larry Fisher grew up with the jewelry business in his blood.

The son of a jeweler in northern Minnesota, Fisher moved to Albert Lea in 1987 with his wife, Sandra, to start his own jewelry business.

“It was pretty scary going into a community where nobody knew us, but Albert Lea has been very kind to us, very good,” he said.

The couple started Fisher’s Fine Jewelers in the front of the historic Bessesen Building, where the Art on Broadway shop is now located. In 1994, they bought the building at 202 S. Broadway, renovated it and opened it for business in 1995. The store has been there ever since. 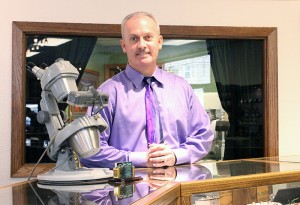 Last month, 26 years after the opening of its first jewelry store in Albert Lea, Fisher’s Fine Jewelers was named Small Business of the Year by the Albert Lea-Freeborn County Chamber of Commerce.

“I was blown away,” Fisher said. “It makes me feel good that the community appreciates the hard work we’ve been doing over the years.”

The jewelry store is best known for its custom designs, which Fisher said is what he has built his business on.

He estimated while about 85 percent of what he carries is for women, there are many men’s items, including tie chains, money clips, wedding bands, bracelets and watches, along with a selection of fingerprint jewelry, baby jewelry and clocks.

“I stand behind everything I sell,” Fisher said. “I try to give the best price year-round.”

He credited his customers who bring him their own ideas to help him create one-of-a-kind pieces of jewelry.

Fisher, certified as a gemologist and master goldsmith from a school in Paris, Texas, has been a supporter of several community efforts over the years.

He has supported Ducks Unlimited, Pheasants Forever, Habitat for Humanity and the Bayside Ski Club, to name a few. He is a member of the Historic Preservation Commission and said he is a strong supporter of the lakes. Outside of these responsibilities, he races snowmobiles and motorcycles. He and his wife have two children.

Fisher said he anticipates working until he is 65 or 70 years old. He looks up to his father, Ivan, who worked as a jeweler for 51 years throughout North Dakota, northern Minnesota and Canada.

“My dad knows it was a challenge for me to start up a new business in a new place,” he said.