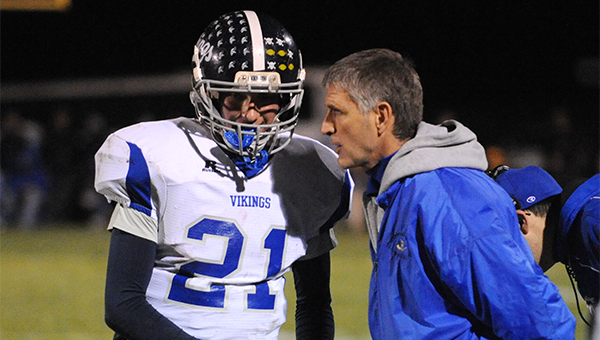 Capitani gets Vikings back on the winning track

Making the state playoffs is nothing new for Northwood-Kensett head coach Dave Capitani. In 25 years as the head coach of the Vikings, his teams qualified for the postseason 14 times and won six district titles.

Coming off a 4-5 season in 2011 that included a forfeit win, the Vikings showed significant improvement in their second season of 8-Man football. 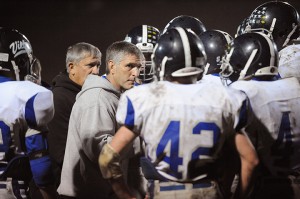 Dave Capitani talks to his players during a timeout during the first round of the 8-Man state playoffs in Lansing against Kee High School. Northwood-Kensett won 36-22. — Micah Bader/Albert Lea Tribune

Q: What sets this season apart from the other teams you’ve coached in the last 25 years?

A: We’ve had many good teams in the past. If anything set this team apart from others, it was their resiliency. They kept moving forward no matter what happened.

Q: When did you realize you had something special with this group?

A: Probably in the West Bend game. They were a very good team with most of their starters back from last year, and they beat us badly last season. Although we lost, we won the second half, and our defense was outstanding.

Q: What has your coaching staff been doing to improve?

A: We have been together for a long time, and we’re very comfortable with each other. We’ve added a couple of younger volunteers over the past few years. We attend a team football camp each year and have attended many clinics, though they are more difficult to find for 8-man. (Assistant coaches on Northwood-Kensett’s football roster are Daryl Love, Marty Cotter, Steve Hartman and Ryan Parker.)

Q: What surprised you most about this year’s group?

A: Again, their resiliency.

Q: Now that you’ve made it to the second-round of the state playoffs, are you settling into playing 8-Man football.

A: We are surely getting closer.

Q: What was your highlight of the season?

A: Probably the loss to Don Bosco in Week 9. Though we lost to the eventual state champions, we out-gained them considerably and it was a great game for four quarters.

Q: Which do you like better 8 or 11-Man football, and what are some advantages and disadvantages?

A: I don’t really have a preference. The advantage of 8-Man is that there are less kids to watch during a game, and sometimes its easier to see things from a coaching standpoint. Also, I believe it’s easier to throw the ball in 8-Man. I think the defenses are at a disadvantage. You can’t be poor tacklers or you will give up a lot of points.

Q: What do you tell your players to do in the offseason? Are you a multi-sport athlete advocate, or do you prefer that the kids specialize in football?

A: I am 100 percent for kids to be active in other sports. Small schools can’t afford to have kids specialize.

Q: What were the keys to scoring so much this season?

A: We had a lot of playmakers and an offensive line that improved greatly through the season.

Q: Have you ever coached any
other sports?

A: I currently coach junior high wrestling and varsity boys’ track. I used to coach baseball.

Q: When did you start playing football?

A: I started playing competitive tackle football in seventh grade.

Q: Did you play football in high school or college?

A: I played high school football in Knoxville, Iowa. I didn’t play in college.

A: Not really, but I’ve learned a lot from other coaches at clinics.

Q: How do you stop a team playing 8-Man football?

A: You must be very disciplined. Everyone needs to take care of their responsibilities. You must tackle well, and speed always helps.

Q: Northwood-Kensett had an exceptional season this year. What’s the next step for the program?

A: We just want our athletes to continue to work hard and focus on improvement. If they do that, hopefully we will continue to have success.

Q: What needs to happen next year to find the same success that this year’s group had?

A: Keep a positive attitude, and have great effort and team unity.

Q: How much longer do you see yourself coaching football?

A: This was my 31st year and my 25th as a head coach. When you have a group like we had, I think I could coach for a long time. When I no longer enjoy it, that will be the time to get out.

*A Northwood-Kensett loss to West Bend-Mallard was changed to a win because of an ineligible Wolverine player.

Seasons as NRHEG as head coach: 11

Seasons as Albert Lea head coach: 3 (16 as an assistant coach)