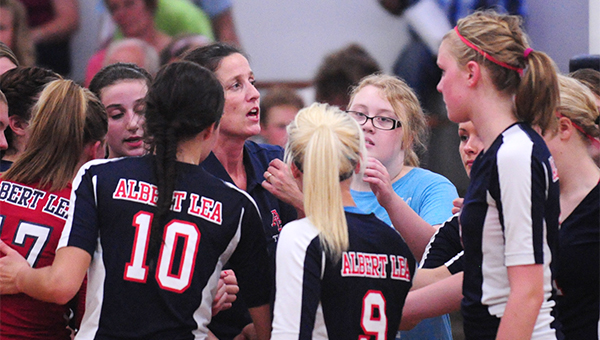 Lisa Deyak, head coach of the Albert Lea volleyball team, talks to her team during a timeout at United South Central. The Tigers fought back from a 2-0 deficit to beat the Rebels 3-2. — Micah Bader/Albert Lea Tribune

The Albert Lea volleyball program has been gaining steam over the last three years, which culminated in the Tigers’ first winning season since 2006.

Head coach Lisa Deyak led the Tigers (15-10 overall, 6-3 Big Nine Conference) to a first-round bye in the Section 1AAA tournament and the same number of conference wins as the last four years combined. 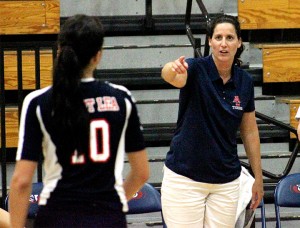 The Tigers played hard no matter what the scoreboard showed, which led to a pair of comeback non-conference wins. Against New Richland-Hartland-Ellendale-Geneva, Albert Lea faced elimination after Game 3, but the Tigers won the last two matches with their backs against the wall to win the match 3-2. At USC the comeback was even more drastic. Albert Lea trailed 2-0 after the first two games. However, the Tigers reeled off three straight wins to win the match.

Q: When did you realize that your team was going to be competitive with the best in the state?

A:  You never know exactly how the season will go, but I knew we could be competitive when we were playing better at the beginning of this season than we did at the end of last season.

Q: What sets this season apart from the other groups you’ve led in your seven years of coaching?

A:  Preparation. This group worked harder in the offseason than any team before it. Several athletes played club volleyball for several years, and all the players worked hard during our summer preseason training. We also had great parent support, and I had a fantastic high school coaching staff with Annika Smed, Jamie Cameron, Gina Klennert, Lindsey Tollefson and Ruth DeHaan.

Q: What are some things your coaching staff did that helped the team improve?

A:  My staff always had great ideas and input on everything from practice drills to game strategy.  They also gave a lot of extra time in the summer, at weekend tournaments, and during youth volleyball. It was a true team effort.

Q: What surprised you most about this year’s group?

A: I was never really surprised. I knew they could be very successful. As a coach, very often, the trick is bringing potential to fruition.

A: We need to continue building our program systemically so that all our players are more knowledgeable and skilled by the time they become varsity players. We will continue working on offense, aggressive serving and serve-receive.

Q: What was your highlight of
the season?

A: Beating six Big Nine schools, earning the No. 4 seed in our section, and beating Mankato West were three highlights.

Q: What do you tell your players to do in the offseason? Are you a multi-sport athlete advocate, or do you prefer that the kids specialize in volleyball?

A: I think that is a personal choice. There is no one right answer. I tell my players to do whatever they can to prepare for next season. The reality in AAA volleyball is that most varsity rosters are made up entirely of girls who have played years of club volleyball. To compete, we have to play as much in the off-season as possible. Our players need to do whatever they can to prepare.

Q: This group thrived under pressure. I distinctly remember comeback wins at United South Central and at home against New Richland-Hartland-Ellendale-Geneva. What made the team so resilient?

A: We had good leaders on the court. As a group, they are also very encouraging of each other; they don’t point fingers when a mistake is made. They were also in really good physical shape, which always helps in a long battle.

Q: Have you ever coached any other sports?

Q: Have they helped you coach volleyball?

A: It has definitely helped to coach other sports. I use bits and pieces from all my past experiences.

Q: When did you start playing volleyball?

A: I started playing in the ninth grade. We didn’t have middle school sports for girls where I grew up.

Q: Did you play volleyball in high school or college?

A: I played volleyball at River Valley High School in Spring Green, Wis.  I played junior varsity when I was a freshman and varsity in grades 10 through 12.

A: I am always using ideas from various coaches, but there isn’t one coach in particular who I model.

Q: What’s the most valuable lesson you’ve learned as a coach?

A: Relationships are the most important part of anything we do — including coaching.

Q: Albert Lea had an exceptional season this year. What’s the next step for the program?

A: Enjoy our success, plan for next year and work hard in the offseason.

Q: What needs to happen next year to find the same success that this year’s group had?

A: We have five very talented and experienced varsity players returning with Kassi Hardies, Hope Landsman, Taylor Willis, Camryn Keyeski and Julia Deyak. We need to develop our incoming players so they are ready to play AAA varsity volleyball.

Q: How much longer do you see yourself coaching volleyball?

A: I’m not sure. I do really enjoy coaching, but the 70-plus hour weeks are a challenge on many levels. I am making that decision on a yearly basis. It has really helped to have helpful assistants and parents.