Funeral services for Velva Oothoudt, 94, of Winnebago, will be at 11 a.m. Monday at Winnebago United Methodist Church with the Rev. Durene Cornell officiating. Burial will be in Riverside Cemetery, Winnebago. Visitation will be from 2 to 5 p.m. Sunday at Spencer‑Owen Funeral Home in Winnebago. Memorial donations are preferred to Parker Oaks Auxiliary, Winnebago Area Museum or Caring Pregnancy Center of Fairmont. Web tributes may be left at www.spencerowen.com.

Velva Mary Ann (Meyer) Oothoudt was born April 20, 1919, in Walters, the daughter of Emil and Emma (Huper) Meyer. She was a graduate of Kiester High School and the Minnesota School of Cosmetology, Minneapolis. While working in Albert Lea, she met her husband, Elmo Oothoudt. They were united in marriage on Jan. 11, 1942, in Walters. 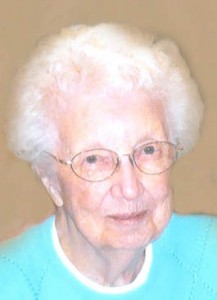 Following their marriage, Elmo served in World War II. Upon his return they managed C. Thomas Grocery store in Wells and later moved to Winnebago to own grocery stores there. They owned and operated the JU-ST Egg Company for several years. Velva also worked at Beach’s Bakery and the MET Corporation in Winnebago. Winnebago was her home for more than 65 years.

In her spare time, Velva enjoyed quilting, designing teddy bears, playing cards with friends, reading and walking. After retirement, Velva spent time at the farmer’s market selling apples from a friend’s orchard. She was an active member of the United Methodist Church in Winnebago, taking part in many roles. She cherished time spent with her granddaughters and their families and loved spending time at the lake. Velva delivered Meals on Wheels until she was 85.

Velva died quietly on Nov. 7, 2013, at the age of 94 at Parker Oaks Retirement Community where she had been a resident for more than six years.

She was preceded in death by her parents; husband, Elmo; sisters Viola Mattick, Margaret Wacholtz and Helena Anderson; and brothers Orville and Ellwood Meyer.