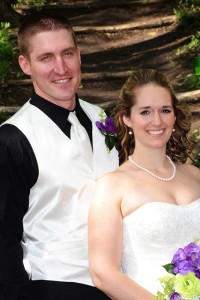 Alison Sabinish, of Albert Lea, and Andrew Hertges, of Albert Lea, were married at 4:30 p.m. May 18, 2013, at Arrowhead Point County Park. The Rev. Clayton Balsley performed the double-ring ceremony.

The groom is the son of Susan Hertges, of Albert Lea, and the grandson of the late Ralph and Pauline Hertges, of Adams.

Maid of honor was Alexandra Hippen, cousin of the bride. Bridesmaids were Jennifer Hayes, Megan Moritz and Nicole LaFrance, all friends of the couple. Flower girl was Laina LaFrance, goddaughter of the couple.

The bride is a 2000 graduate of Albert Lea High School and a 2007 graduate of the University of Wisconsin-La Crosse.

A reception and dance were held at the Edgewater Bay Pavilion following the ceremony.

A wedding trip was taken to Turks and Caicos Islands in the Caribbean.