1 injured after FedEx truck is hit by train 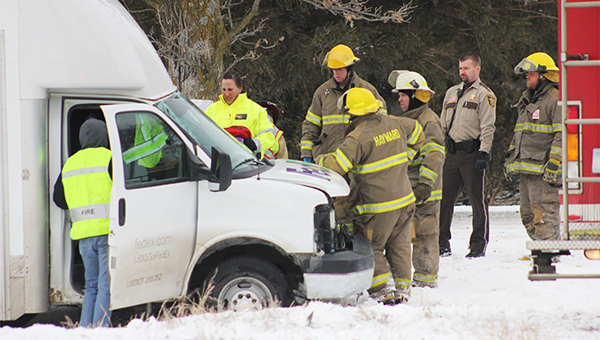 One person was reportedly injured after a FedEx truck was reportedly hit by a train off of Freeborn County Road 46 east of Hayward, between Albert Lea and Austin. — Sarah Stultz/Albert Lea Tribune

HAYWARD — A 50-year-old man was injured Thursday morning after his FedEx truck collided with a train east of Hayward. 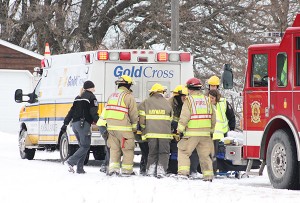 Timothy Moore, of Rudd, Iowa, had just delivered a package to a house at 85208 Freeborn County Road 46 and was leaving the 21-acre property belonging to Michael Frisk and Linda Anderson. Moore traveled south down the driveway from the house, which crosses the tracks before intersecting with County Road 46.

He did not see the Iowa, Chicago and Eastern Railroad train approaching from the east, according to Keith Bolinger, patrol sergeant with the Freeborn County Sheriff’s Office.

A FedEx truck sits off a railroad track east of Hayward after it was reportedly struck by a train Thursday morning. — Sarah Stultz/Albert Lea Tribune

The train, traveling 23 mph, struck the front left portion of the truck, Bolinger said. The FedEx truck came to a rest facing east in the yard of the residence.

He said the train cars were separated to allow emergency responders to reach the truck. Albert Lea and Hayward firefighters cut off the door to the truck to extricate Moore.

He was taken by Gold Cross Ambulance to Mayo Clinic Health System in Austin.

The patrol sergeant said Moore worked out of the Clear Lake FedEx plant. His injuries were not life-threatening.

Iowa, Chicago and Eastern Railroad is a subsidiary of Canadian Pacific Railway.