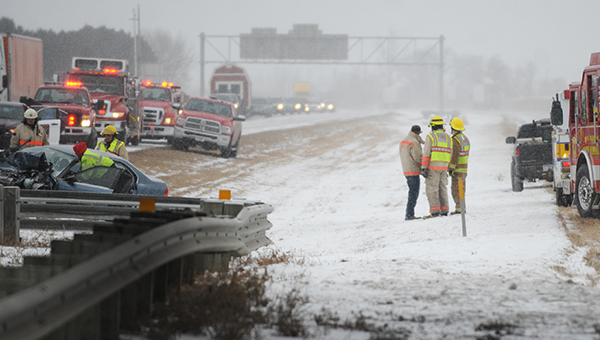 Emergency personnel work the scene of a car accident on southbound Interstate 35 at the intersection with Interstate 90 Monday morning. — Drew Claussen/Albert Lea Tribune

Three people were injured Monday morning after a rear-end collision on Interstate 35 at the intersection with Interstate 90.

Leslie A. Thilges, 52, of Rochester was reportedly driving a 1998 Honda Civic at 10:40 a.m. when she went to merge from westbound Interstate 90 onto southbound Interstate 35, lost control and spun out.

The state patrol listed the road condition as icy. No alcohol was detected.

Thilges, Roering and Roering’s passenger, Courtney M. McKay, 25, of Porter, Texas, were transported to Mayo Clinic Health System in Albert Lea for injuries that were not life-threatening.

The State Patrol responded to a rollover crash on Interstate 35 near milepost 11 at 4:05 p.m. Monday.

Initial reports state a 2008 Toyota pickup was headed southbound on Interstate 35 when it crossed the median and collided with a 2013 Freight semi headed northbound.

The State Patrol indicated there was an injury, but no other information — including the drivers of both vehicles — was available as of press time.