Victory in Texas Bowl slips away from Gophers 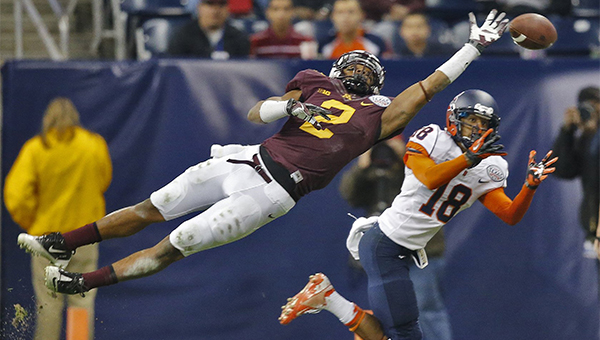 HOUSTON (AP) — Minnesota coach Jerry Kill wanted to do something to spark his team in the second half of the Texas Bowl against Syracuse on Friday night.

So he decided to coach from the sideline for the first time since Sept. 28.

His tactic worked and the Golden Gophers rallied from an 11-point fourth-quarter deficit to take a three-point lead. But the magic soon wore off and Syracuse came back late for the 21-17 win.

“I made a decision,” Kill said about joining his team on the sideline. “I felt that we needed a little bit of pick up. I talked to a couple of the coaches, and we weren’t as zippy as we have been. I made an instinct decision, but whether right or wrong, I did it.”

Kill began the game in the press box, where he has observed his team since returning from a leave of absence because of his epilepsy. Kill has had five seizures on game day in his two-plus seasons with the Golden Gophers. He took the leave of absence in October and returned a couple of weeks later.

“I felt I would do anything I can to help,” Kill said. “I’m not sure if it helped or not. Evidently, it didn’t because we didn’t win the game.”

The Gophers loved seeing Kill back on the sideline and were disappointed they weren’t able to hold on for the win.

“I think the whole team got pretty pumped when he made that announcement,” receiver Drew Wolitarsky said. “Coming into halftime, I felt like everything was a little flat and he gave us that spark, which is another reason why we came out and started executing better.”

Terrel Hunt scrambled 12 yards for a touchdown with 1:14 remaining to lift Syracuse to the victory and win the Most Valuable Player award.

“It would have nice if we could have just knocked them out and won by 17 or something,” Syracuse coach Scott Shafer said. “That’s kind of not our way this year. I think it was appropriate that we won in that fashion.”

Brisly Estime set up Hunt’s touchdown with a 70-yard punt return. Estime would have scored if not for a tackle by punter Peter Mortell.

“Brisly is a quick as a jitterbug,” Shafer said. “We felt that he could give us something.”

It was the second-longest punt return in Texas Bowl history.

Syracuse (7-6) led 14-3 entering the fourth quarter before Mitch Leidner threw two touchdown passes and a 2-point conversion to put the Golden Gophers up 17-14.

After the Orange regained the lead, Minnesota attempted two long passes to the end zone on the final plays. The first slipped through Wolitarsky’s arms and the second, as time expired, was knocked down near the end zone.

“I gave my best effort to go get it,” Wolitarsky said. “It’s tough, but we’re going to move forward. We’re a young team, and I’m really excited for the next three years.”

Hunt finished with 188 yards passing and 74 rushing with two scores.

Leidner finished with 205 yards passing, Maxx Williams had five receptions for 76 yards and a touchdown and Wolitarsky had 94 yards receiving and a score.

Syracuse attempted a 45-yard field goal with about 3 1/2 minutes left, but it sailed wide right. Robert Welsh sacked Leidner on third down on the next drive to force a punt and set up the winning drive.

The Gophers took their first lead of the game when Syracuse bit on a play-action fake that left Wolitarsky wide open for a 55-yard touchdown that made it 15-14 early in the fourth quarter. Leidner then hit Mike Henry for the 2-point conversion to push the lead to 17-14.

Players and coaches on the sidelines jumped around wildly after the touchdown, while Kill smiled and stood nearly still amid the chaos.

Minnesota cut it to 14-9 when Williams got in front of two defenders for a 20-yard touchdown reception from Leidner on the first play of the fourth quarter. It was the Gophers’ first touchdown on offense since the second quarter of a 24-10 win over Penn State on Nov. 9. Minnesota attempted a 2-point conversion, but Leidner was sacked.

The Orange used a 5-yard touchdown run by Hunt to push the lead to 14-3 with about three minutes left in the third quarter.

Syracuse took a 7-0 lead when Smith scored on a 1-yard run early in the second quarter. That drive was helped by a nifty catch by Christopher Clark, who stretched out to grab a 19-yard reception with a defender in his face just before stepping out of bounds.

Minnesota cut it to 7-3 on Chris Hawthorne’s 41-yard field goal as time expired in the first half.