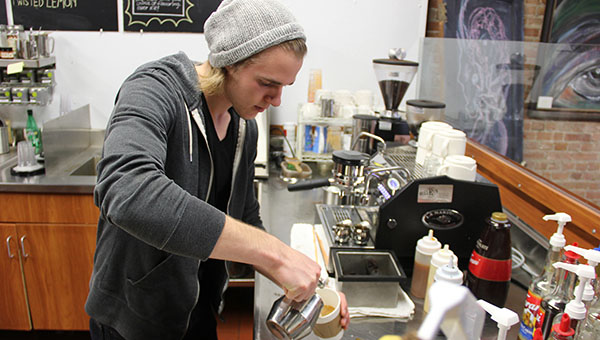 Opening a coffee shop in downtown Albert Lea had been an idea tossed around by the couple that owns A-Best Sew & Vac, so when the owner of Prairie Wind Coffee approached them about buying it, they were interested.

“It had been in the back of our minds for the last 15 years,” said Lisa Hanson last week.

She and Vern Hanson closed on the purchase of the coffee shop Nov. 19, and on Nov. 20, she and son Patrick were busy operating the place. Patrick had six months on the job with former owner Kirk Foley to learn the business, but since the switch, Lisa has been learning it from her son. Meanwhile, she spends time getting to know the customers and learning names.

The purchase price was not disclosed.

Lisa said she is not planning on making changes for now. 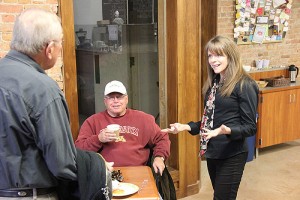 Lisa Hanson speaks to customers Wednesday at Prairie Wind Coffee in downtown Albert Lea. She and her husband, Vern, bought the shop in November.

“I like how Kirk kept the menu simple,” she said. “He really did a good job setting this place up. What’s the saying? If it’s not broken, don’t fix it.”

She added that, in business, it’s always good to keep an open mind for improvements. For instance, she likely will add smoothies to the menu in the summer. She also is looking to see if a drive-up concept might work via the alley.

Lisa said Foley knew the Hanson children, who are grown, and they would come in for coffee or for open mic night. She said he wanted to sell but was careful to keep the new owners local. He approached them about buying.

Lisa said she and Vern might sell ownership to Patrick in future years if he remains interested in the business.

She admitted she isn’t the best at recalling names but has been working on it as she meets the loyal customers. She called it “a fun experience.” The primary challenges, she said, are the usual ones with any business: bookkeeping, administration, inventory.

Prairie Wind had become a common stop for politicians, similar to how they stop at The Trumble’s Restaurant. She said she hopes the coffee shop remains a place for gatherings whether they are political or apolitical.

She is investigating other types of gatherings, too, such as hosting wine tastings, chef sampling and cooking classes. Like many downtown locations, Prairie Wind Coffee is participating in the Holiday Bazaar, when downtown merchants allow other vendors to sell wares in the stores during the weekend of the Christmas shopping season.

Lisa said she and Vern had contemplated downtown locations for their sewing and vacuum store but parking was never quite right. She said they are thrilled to be part of a reinvigorated downtown and look forward to downtown activities.